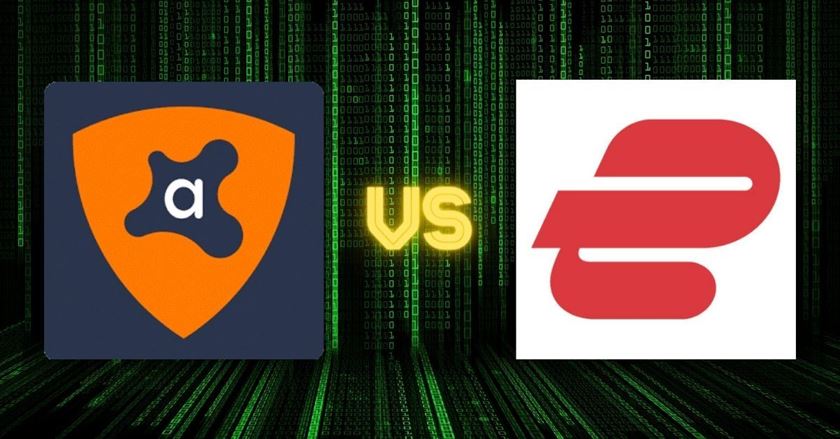 Many rely on Avast Secureline VPN and ExpressVPN to remain safeguarded when they use the internet. Since both are high-ranking services, they’re often pitted up against each other.

Whenever that’s done, it’s always ExpressVPN that’s regarded to be superior. To find out how come, we must and thoroughly review everything the two have to offer.

For starters, here’s a side by side comparison of the two:

Now that we know all the quirks and features of each VPN service, let’s talk about them. After all, this is necessary if we’re going to properly discern which is superior. I’ll start by discussing privacy and security as these two are the most important things every VPN must provide.

Avast VPN is based in the Czech Republic while the headquarters of ExpressVPN is located far away in the British Virgin Islands. Fortunately, both of these locations are 100% VPN-friendly since they’re not under the jurisdiction of any of the world’s major surveillance alliances.

The two services utilize standard military-grade AES 256-bit encryption. But, only ExpressVPN makes use of SHA-512 hash authentication along with an RSA 4097-bit key exchange. At present, what Avast Secureline VPN employs as equivalents remains unknown.

Sadly, users of Avast VPN only have the option to toggle OpenVPN.

ExpressVPN maintains support for OpenVPN (UDP & TCP) and IPSec (LT2P and IKEv2). Apart from that, it also has a proprietary protocol called Lightway, which has been dubbed by online security experts to be very secure as well as speedy.

Complete DNS leak protection is something that both VPN services claim to provide. I had to know if this was true so I conducted some tests using IPLeak.net. Below is a screenshot showing the result after I tested out Avast Secureline VPN and its Singapore server:

And here’s how ExpressVPN and its corresponding server performed:

Neither VPN provider disappointed me. Both successfully hid my real Philippine IP address from the testing software. Due to that, it’s now possible for me to recommend them to anyone who wishes to remain 100% anonymous from any watching malicious third-party.

Avast Secureline VPN and ExpressVPN have no-logs policies that prevent them from tracking, gathering, and storing the private information of subscribers.

One thing that sets the two apart is the fact that ExpressVPN has a RAM-based network. That means all of its servers are unable to store your data. If anything, this is great as you can be certain that your information will remain safe no matter what when you’re using the VPN.

The winner of this first round of our Avast Secureline VPN vs ExpressVPN is ExpressVPN. How come? It supports more protocols, has more servers, and is equipped with a RAM-based server network that makes it much more secure and trustworthy.

Avast VPN doesn’t have unlimited bandwidth whereas ExpressVPN does. As such, it may seem like ExpressVPN is the faster service between the two. To find out whether this is true, I ran speed tests while using each VPN provider. Here’s how Avast VPN’s SG server fared:

Now, this is how my things changed after I moved to ExpressVPN’s equivalent server:

Quite interestingly, Avast VPN made a lesser impact on my base connection. Needless to say, things changed only to a small degree following my move to ExpressVPN. Still, because the former service did slightly better, it’s the winner of this category of our VPN comparison.

Torrenting activity is allowed on ExpressVPN and Avast Secureline VPN’s networks. Aside from that, both providers are fully compatible with major torrent clients such as Vuze, BitTorrent, Deluge, uTorrent, and qBitTorrent, making them suitable for just about everyone.

Sad to say, only ExpressVPN has a fully enabled P2P network. Avast VPN only has a handful of optimized VPN servers that you may utilize. On the bright side, it compensates for its disadvantage by listing down what can be used for torrenting on its apps.

I had to know if both VPN services could keep my online activities hidden from cybercriminals when I torrent. As such, I tested each out using IPLeak.net. Here’s a screenshot showing how Avast Secureline VPN and its dedicated P2P server in New York performed:

Next up, here’s how ExpressVPN’s Hong Kong server fared:

Unfortunately, only ExpressVPN was able to successfully mask my IP address. IPLeak.net was able to detect my location several times while I was utilizing Avast VPN. Hence, I cannot recommend it to anyone that wished to use a VPN mainly for torrenting purposes.

VPN services must bypass the geoblocks of famous streaming platforms like Netflix, Hulu, and BBC iPlayer. Failure to do so would result in them being useless for entertainment purposes.

Thankfully, many have reported that ExpressVPN and Avast Secureline VPN are more than capable of working around local streaming service restrictions. With each, you’ll be able to access an ocean of content that would otherwise be unavailable in your area.

When it comes to popularity, no other streaming platform beats Netflix. Because of that, it was a must for me to know if Avast VPN and ExpressVPN could work alongside it. To test both, I tried to watch Spotlight while paired to their US servers. Here’s how Avast VPN managed:

And this is how ExpressVPN did:

As seen above, neither service failed to grant me access to Netflix USA. Still, the winner for this round of our ExpressVPN vs Avast VPN match is ExpressVPN. The reason why is because ExpressVPN has a larger network, which is capable of bypassing more geoblocks.

A good VPN provider has to protect gamers whenever they go online. In addition, they must let them access foreign servers. Luckily, you can do both these things when using ExpressVPN and Avast Secureline VPN. Thus, both have the potential to be your gaming daily driver.

Sadly, only ExpressVPN can be used alongside your gaming console since it’s the only service between the two that you may install on a router. Due to that, it’s the victor of this crucial round of our Avast SecureLine VPN vs ExpressVPN battle.

VPN services that aren’t compatible with many devices cannot provide comprehensive digital security. The developers of Avast VPN and ExpressVPN understand this. As a result, they’ve created native apps for their services on as many platforms as possible.

Please refer to the table below to know what each service is compatible with:

Besides having router support, ExpressVPN is the only one between the two that maintains an application for Chromebook OS and Linux. For that reason, it’s again the clear winner for this important category of our ExpressVPN vs Avast SecureLine VPN match.

Wide compatibility is useless if your VPN allows for a small number of simultaneous device connections. In this regard, Avast VPN and ExpressVPN stand toe to toe. Both allow for a maximum of 5 same-time gadget pairings with a single basic subscription.

VPN services need to have large networks. Without the appropriate infrastructure, it’ll be difficult to maintain the anonymity of subscribers and bypass geoblocks. Also, the chances of getting overloaded shall increase. Lastly, few connectivity options shall be offered.

ExpressVPN has more than 3000 servers, which is quite impressive. Meanwhile, its Avast VPN only maintains 55 around the globe. Therefore, the winner of this round of our Avast VPN vs ExpressVPN is once again ExpressVPN by default.

The Great Firewall of China is an obstacle that only a few VPNs can overcome. Sad to say, the only service between the two that can do this is ExpressVPN. Using it, all of our testers were able to consistently access the free global internet without any sort of hitches.

Unfortunately, none of Avast VPN’s servers could bypass China’s draconian internet censorship measures. Because of that, it’s not a recommendable service to have for those who are planning to visit the country.

ExpressVPN’s apps are easy to use and setup. Moreover, they’re also a breeze to download and install. Thanks to that, even those who aren’t tech-savvy shall have no issues with using them. If anything, this is great as everyone shall get to benefit from the service.

The native apps of Avast VPN are also great. Aside from being aesthetically-pleasing, they are also designed in a way that everyone can utilize them. While they aren’t as user-friendly as ExpressVPN’s apps, they’ll still provide you with an excellent user experience.

Since it has better apps across the board, the winner of this round of our ExpressVPN vs Avast VPN match is ExpressVPN. With that said, you should note that Avast VPN’s native apps are nearly as good as its competitor’s. Needless to say, they still need some minor tweaks.

Interestingly, both ExpressVPN and Avast VPN lack exclusive features. Why? They choose to focus on the essential things they already have rather than result in gimmicks.

You should know that neither maintains a malware blocker or a split-tunneling feature. On the bright side, both have kill switches. One thing that differentiates them is that ExpressVPN doesn’t have the feature on iOS while Avast VPN offers it on all platforms.

Good customer support is something that all VPNs must have. Without it, customers shall have no means to communicate with their service and ask for assistance if they encounter any problems. Also, they won’t be able to research to solve issues by themselves.

Here’s what ExpressVPN and Avast VPN offer in regards to customer support:

As you can see, both Avast VPN and ExpressVPN have email and chat support. Besides that, the two also have a wide online knowledgebase. Unfortunately, only ExpressVPN has video guides and ticket support. Furthermore, it also has a faster average response time.

For many, pricing is the most important thing to consider when looking for a VPN service. After all, nobody has an unlimited budget to spend on online security. Therefore, VPN providers must price themselves competitively to remain ahead of their competition.

Please refer to the table below to know the pricing schemes of the two:

ExpressVPN is known to be one of the most expensive VPNs. As you can see, all of its prices are more expensive than Avast VPN’s. Fortunately, the service, like its competitor, maintains a 30-day money-back guarantee policy that makes getting refunds super easy.

Is Avast VPN better than ExpressVPN?

No. Avast VPN is not better than ExpressVPN. Despite having more features and being more affordable, the service isn’t worth the time and money of any internet user that’s considering it and ExpressVPN.

With that said, please note that I’m not saying that it’s a bad VPN. Rather, it simply does not match its competitor in almost every regard. By getting ExpressVPN, you’ll also be getting superior security, apps, customer service, and connectivity.