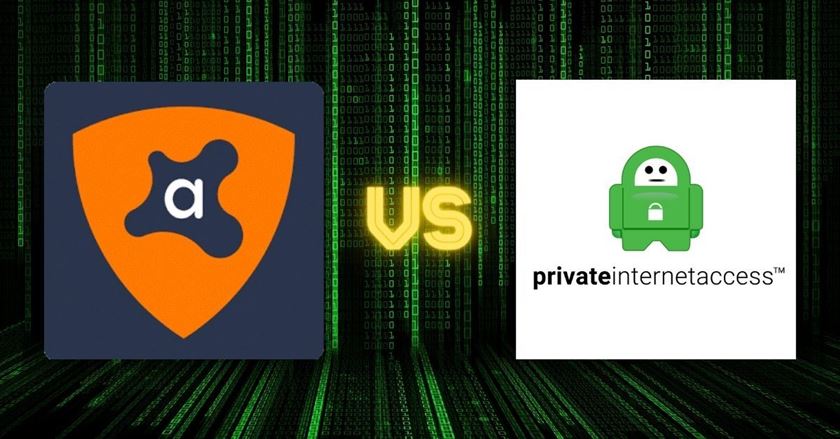 Avast Secureline VPN and Private Internet Access (PIA) are both very popular VPN providers that are often compared with one another. Online security experts unanimously agree that the latter service is better. To understand why so, continue reading this comparative article.

I’d like to kick things off with a table showing everything both offer:

To say that Avast VPN and PIA are different would be an understatement. After all, a plethora of things set them apart from one another. With that said, it’s necessary to go into detail to fully understand why Private Internet Access is superior. Let’s start by talking about security.

PIA is based in the United States, which is a member of the Five Eyes Alliance. Due to that, the service must follow certain restrictive copyright and privacy laws that restrict it from operating freely. If anything, this puts it at a major disadvantage versus most competitors.

Unlike its rival, nothing stops Avast VPN from providing complete digital protection to its users. That’s because it’s based in the Czech Republic, which is a VPN-friendly country.

Sad to say, OpenVPN is the only VPN protocol that’s supported by Avast VPN. Meanwhile, PIA also allows you to take advantage of IPSec/L2TP, and WireGuard. Both are fast, secure, and 100% capable of working around all kinds of online geo-restrictions.

Here’s the result of a leak test I ran while paired to Avast VPN and its server in Singapore:

And this is how PIA and its corresponding server did when I ran the same test:

Thankfully, both services were able to hide my IP address without any hitches. As such, it’s now possible for me to confidently recommend them to people that value their anonymity above everything else. Using either, you’ll definitely get to remain under the radar.

Private Internet Access and Avast Secureline VPN both maintain strict no-logging policies. For that reason, you don’t have to worry about the two giving away your data to anyone.

Unfortunately, neither service has begun to utilize RAM-based servers. For those who don’t know, these kinds of VPN servers are completely incapable of keeping taps of and storing private user information. Any provider that uses them is completely trustworthy.

The winner of this round of our Avast VPN vs PIA is Private Internet Access since it supports more protocols. Moreover, it also has a larger network and more features that are designed to keep you safeguarded whenever you browse the internet.

I ran a couple of speed tests to determine which VPN provider is faster. Here is a screenshot showing how Avast Secureline VPN along with its Singapore server did:

Next up, this is how my connection changed after I moved to PIA’s same-location server:

The results of my speed tests left me surprised. I did not expect Private Internet Access to bring down my connection to such a profound extent. With that out of the way, since Avast Secureline VPN did much better, it’s the winner of this important category of our comparison.

You’re allowed to torrent on Avast VPN and PIA’s networks. In fact, the latter service even has a fully dedicated P2P network while the former boasts a handful of optimized servers. Besides that, both VPN providers are compatible with every mainstream torrenting client.

I had to test each service to know if they don’t leak when used for torrenting. Below shows how the New York server of Avast Secureline VPN managed:

In comparison, here’s how PIA’s server in SG fared:

Fascinatingly, only PIA managed to keep my IP address hidden. The testing software almost instantly caught my location when I was using Avast VPN. Hence, the winner of this round of our Avast Secureline VPN vs Private Internet Access match is none other than PIA.

A VPN service isn’t just a protective measure. It’s also a tool that can let you access otherwise unavailable streaming website content. Needless to say, no every VPN allows you to tap into the foreign libraries of Netflix, Hulu, Disney+, BBC iPlayer, HBO+, and Amazon Prime.

Thankfully, user reports on Reddit are nearly unanimous in saying that Avast Secureline VPN and PIA VPN are good for streaming. Each is said to easily work around the restrictions of all popular streaming platforms and enable you to watch an ocean of new content.

Netflix is by far the world’s most popular streaming website. Due to that, it was essential for me to see if both VPN services could work alongside it. To do this, I tried to watch Spotlight while connected to their US servers. Below shows how Avast Secureline VPN did:

Now, this is how PIA managed:

Even if both VPN services managed to let my watch without issues, my winner for this category is PIA. The reason why is because it maintains a larger network that allows its users to access more restricted streaming service libraries.

Avast Secureline VPN and PIA can both be used for gaming. However, you’re better off with the latter VPN service simply because it has router support. That means you can use it to play safely and connect to foreign game servers on your preferred gaming console.

This table shows what Avast VPN and PIA are compatible with:

As you can see, PIA works on a lot more operating systems and browser extensions. Also, it can be installed on a wide range of routers. Hence, the service is the winner for this category.

You can use Avast VPN with up to 5 devices simultaneously with one account. Although this may seem rather impressive, you should know that many other VPN providers have much better offerings. One example is PIA, which allows for up to 10 same-time gadget pairings.

It’s important to choose a provider that operates a lot of VPN servers. Why? Because it’s more capable of keeping you anonymous and is less prone to getting overloaded. In addition, it also has a higher chance of being able to bypass arbitrary internet geo-restrictions.

For this category, PIA takes the win as it operates a whopping 3000+ servers while Avast VPN only operates 55. Of course, this shouldn’t come as a surprise as Private Internet Access has been around for longer, and thus, has had more time to develop its infrastructure.

Overcoming China’s draconian internet censorship measures is by no means an easy feat. As a matter of fact, only a select few VPNs can get the job done. Even fewer have the ability to do so with the consistency needed by average consumers like yourself.

Between the two, only Private Internet Access can work in China. However, you must know that it cannot reliably provide you with access to the global internet. Our testers report that they’ve only found success with 1 out of 3 of its servers.

The desktop and mobile applications of Avast Secureline VPN are easy to use, navigate, and configure. If anything, they’re perfect for those who aren’t tech-savvy. With that said, the apps aren’t perfect as you’ll need time to get used to and master them.

Private Internet Access’ native apps have simple interfaces that people of all sorts are certain to appreciate. Upon opening them, you’ll immediately see a large quick-connect button. To change the service’s settings, simply click the three-dot icon found on the upper-right corner of the apps.

Despite both of them having great apps, the winning VPN provider for this category of our match is PIA. I chose it simply because I found its applications easier to get used to and master. Apart from that, I liked the fact that their looks are customizable since they have dark modes.

Sad to say, both Avast Secureline VPN and Private Internet Access lack exclusive features. But, both do have essential security features that you’ll find useful. While the former service only has a kill switch, the latter also has an ad and malware blocker (PIA MACE) and split tunneling.

Because PIA has slightly more to offer, it’s the winner of this category of our match.

In today’s competitive VPN industry, a provider must have good customer service to overcome its competitors. Fortunately, the developers of Private Internet Access and Avast Secureline VPN understand this. They’ve made sure their services have decent support.

Please refer to the table below to know what the two offer:

It’s clear that PIA has better customer service than Avast VPN. After all, it maintains ticket support and has a superior average response time. Besides that, I’ve discovered that it maintains a larger online knowledgebase that makes DIY troubleshooting a breeze.

Here’s a breakdown of how much each VPN service provider charges:

Private Internet Access is much more expensive than Avast Secureline VPN. Moreover, it lacks a free trial, unlike its competitor that lets you test it for 7 days. Needless to say, the 30-day money-back guarantee policy in place will still let you use the VPN without risks.

Because its prices are much better, the winner of this final round of our PIA vs Avast VPN battle is Avast VPN.

No. As you may have seen in this Private Internet Access vs Avast SecureLine VPN in-depth comparison, Avast VPN is inferior to PIA. Although it’s slower and more expensive, the provider has better security, streaming, and torrenting capabilities.

On top of that, it is compatible with a lot more platforms and allows for a greater amount of simultaneous device connections under a single account. Finally, the service boasts more additional features, superior applications, as well as superb customer service.

Please note that Avast VPN is not a bad VPN. In fact, it’s better than a large chunk of what’s available. However, it just falls short of its competitor in almost every single regard.