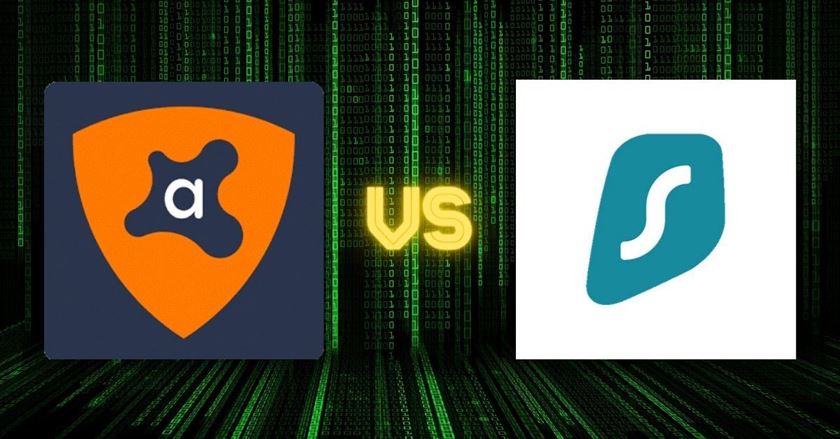 Avast Secureline VPN and Surfshark are both major players in the VPN industry. Due to that, people often compare these two. Each time this is done, Surfshark emerges as the superior provider. How come? Let’s find out.

To kick things off, here’s a table showing what both VPN services offer:

While the two have many differences, they’ve also got many similarities. Because of that, it can be quite hard for average consumers like yourself to discern why Surfshark is better. Therefore, we must talk about each VPN provider in greater detail.

Avast VPN is based in the Czech Republic whereas Surfshark’s headquarters is tucked away in the British Virgin Islands.

Despite these places being very different, they do have one key thing in common. Both of these locations aren’t under the jurisdictions of the world’s primary surveillance alliances. Hence, they may operate freely without being encumbered by restrictive privacy and copyright laws.

Both VPN services make use of military-grade AES-256 encryption.

What sets Surfshark apart is its utilization of SHA-256 hash authentication and an RSA 4096-bit handshake. Unfortunately, what Avast Secureline VPN employs as equivalents haven’t been disclosed to the public yet. Therefore, we can only speculate for now.

Like most top-tier services, the two maintain support for OpenVPN.

Furthermore, Surfshark also lets you toggle Shadowsocks, IPSec/L2TP, and IPSec/IKEv2. Sad to say, Avast VPN currently does not support any other protocol. Consequently, its subscribers have no choice but to stick with OpenVPN.

Here’s the result of a leak test I did after pairing to Avast VPN’s Singapore server:

And this is how Surfshark did once I moved to its server in Hong Kong:

Unsurprisingly, both Surfshark and Avast Secureline VPN were able to keep my real IP address hidden from the testing software. For that reason, it’s now possible for me to safely conclude that the two VPNs are 100% leak-free. Using either, you’ll be able to remain anonymous.

Surfshark and Avast Secureline VPN maintain strict zero-logging policies. But, only the former service has a 100% RAM-based network. As a result, it is the only one that’s completely incapable of tracking, collecting, and storing the private data of its subscribers.

The winner for this round of our Surfshark vs Avast VPN is Surfshark. Why? It has better server security, protocol support, and encryption. Moreover, the provider has a network that’s larger as we’ll discuss in detail later in this article.

Below is a screenshot of the results of a speed test that I conducted while connected to Avast Secureline VPN and its server in Singapore:

Now, here’s how it changed after I transferred to Surfshark’s corresponding server:

The results of my tests surprised me. My uploading and downloading were slightly better when I was using Avast VPN. However, my ping improved once I transferred over to Surfshark’s server in the same location.

Needless to say, the difference between the two’s speed capabilities is negligible. Thus, I’m ending this round of our Avast Secureline VPN vs Surfshark battle with the tie.

Avast Secureline VPN and Surfshark are suitable for torrenting. Besides being compatible with all major torrenting clients, both have the infrastructure to facilitate safe downloading. Sadly though, only Surfshark boasts a 100% P2P enabled server network.

To determine if both services didn’t leak when torrenting, I tested them. Here’s the result after connecting to Avast VPN’s P2P server in New York:

Next up, this is how Surfshark and its Singapore server performed:

You may stream content from platforms such as Netflix, Hulu, and BBC iPlayer using Avast VPN and Surfshark. The former service’s apps even provide a list of servers that are suited for the job. Meanwhile, most of the latter’s servers are known to bypass nearly any geoblock.

To determine if the two were good for streaming, I tried to watch Spotlight on Netflix while paired to their US servers. Below is a screenshot showing how Avast VPN fared:

Now, this is how Surfshark did:

Quite surprisingly, Avast Secureline VPN and Surfshark did equally as well during my streaming tests. Be that as it may, the winner for this round of our match Surfshark. I picked it simply because it has more servers. That means it can grant you access to more libraries.

You can utilize Avast VPN and Surfshark for gaming purposes. However, only Surfshark can be used with consoles since it’s the only one that may be installed on routers. For that reason, it is the winner of this round of our Avast Secureline vs Surfshark battle.

Please refer to the table below to know what each VPN functions on:

You can use Surfshark on far more platforms. Besides router-friendly, the VPN provider also has apps for Chromebook OS and Linux. Hence, users of those operating systems won’t be left out.

Avast Secureline VPN lets you connect up to  5 devices simultaneously. While this is great, you must know that many competing VPNs have better offerings. A prime example is Surfshark, which allows for an unlimited number of same-time connections with a single account.

The network of Avast VPN consists of just 55 servers around the world. Due to that, the service isn’t the best choice for those looking to have lots of connectivity options. Using it, you’ll only be able to access the version of the internet in a handful of countries.

In comparison, Surfshark’s network is quite large. The VPN operates more than 1700 servers across the globe. As such, connecting to anywhere you’d want to is a breeze with it.

China’s draconian internet censorship measures are an obstacle many VPNs cannot manage to overcome. As such, the ability to bypass the Great Firewall and do so consistently has become a hallmark of any good service provider. Success doing this generally means a VPN can work around just about any geo-restriction or censorship system in place.

Sad to say, only Surfshark can provide you with free access to the global internet. Avast VPN doesn’t have the network or servers to achieve this feat.

The native applications of Surfshark all have a minimalistic aesthetic to them. Once opened, you will have everything you need displayed on the home screen. Because of that, all of the VPN’s apps are incredibly easy to use. In fact, they can be used by those who aren’t tech-savvy.

Avast Secureline VPN’s apps look great. In addition, they’re also very user-friendly. One great thing about them is that they provide a list of streaming and torrenting servers. Thanks to that, you’ll not have to research or guess which server to use for a specific task.

Despite both services having great applications, the winner of this category is Surfshark. It has apps that are better than anything Avast VPN has to offer. They’re superior in every regard, making them capable of providing you with a much better VPN user experience.

Unfortunately, the developers of Avast Secureline VPN haven’t equipped their service with any exclusive features. That means you won’t be getting anything special with a subscription to the provider. If anything, this leaves it at a disadvantage as many competitors have much to offer.

Surfshark has a free to use feature called MultiHop. It’s basically a proprietary version of double VPN. Using it, you’ll get to route your web traffic through two servers.

In addition to what’s mentioned above, Surfshark also has two paid add-on features. The first is an alert system known as HackLock. Meanwhile, the second is BlindSearch, which is a secure search engine that doesn’t collect your data then sell it to third-parties.

Since it has much more to offer, the winner of this category of our Surfshark vs Avast Secureline VPN is none other than Surfshark.

The table below shows what each VPN offers in regards to customer support:

Surfshark has better customer support than Avast VPN. Besides having a better average response time, the service also boasts ticket support. Additionally, it’s important to mention that it also currently has a drastically larger online knowledge base.

Please refer to the table below to know how much each VPN charges:

The prices of Avast Secureline VPN and Surfshark are comparable to what other VPN providers charge. With that said, it’s clear that Surfshark offers better value for money. Although it’s generally more expensive, it’ll provide you with a superior deal.

Is Avast VPN better than Surfshark?

No. As you may have seen in this Avast VPN vs Surfshark in-depth comparison, we must let Surfshark win overall… as it is superior in every single regard. In fact, I cannot recommend the former to anyone unless they get it for free.

Don’t get me wrong though, Avast VPN isn't bad by any means. It’s just that it still needs a lot of improvement. The service’s developers must establish more servers, add several unique features, and improve on customer service and security.