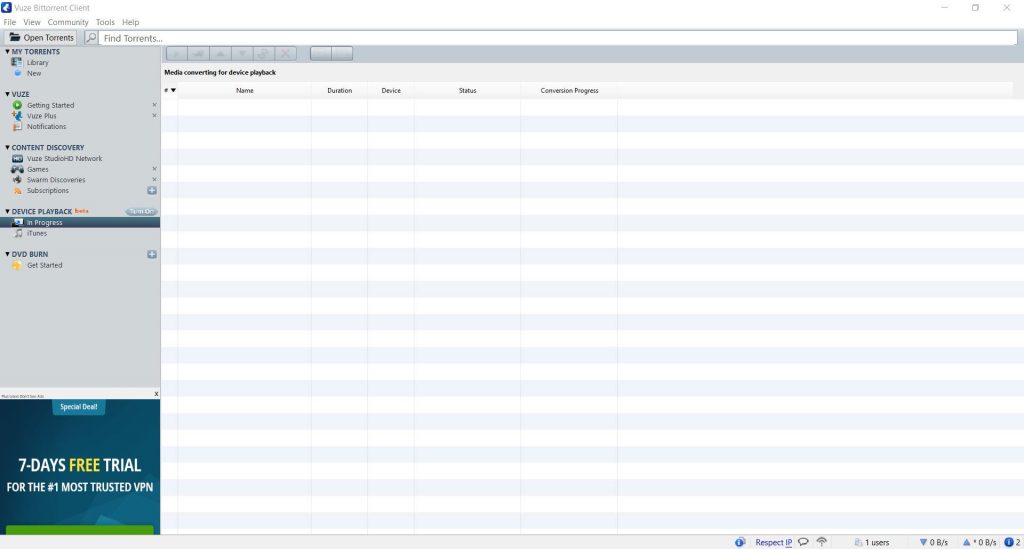 Few torrent clients have managed to garner the same level of popularity as Vuze. At present, it's regarded to be one of the best options for casual users and enthusiasts alike.

As you might already know, torrenting without a VPN can be risky.

Doing this leaves you open to becoming preyed upon by hackers. In addition, access to torrent client websites such as Vuze’s is restricted in many countries. To get around restrictions, you’ll need to use a VPN provider that’s able to circumvent any of the geoblocks that you throw at it.

So what VPN should you use for Vuze?

Lots of people have varying opinions. However, in this article, we’ll talk about what we here at VPN Thrive believe are the best choices for the torrent client. Besides that, I will also go into detail about everything else you must know about the topic so that you’ll have no questions.

Torrenting Capabilities: NordVPN is the preferred VPN for torrenting of millions of individuals around the world. My tests prove that its many P2P servers don’t leak. On top of that, they’ve shown that these servers are faster than your average VPN server. As such, it is certain that while connected to them, you’ll be able to finish downloading on Vuze in absolutely no time.

Privacy & Security: Your digital privacy and safety are NordVPN’s absolute priority. The VPN uses AES-256 encryption and supports all sought-after VPN protocols. Its apps are also very easy to use. They’re also equipped with every feature that you may find useful when on Vuze.

Given that it’s a top-tier provider, NordVPN has a concrete zero-logging policy. However, it lacks a 100% RAM-based network. On the bright side, it has announced that it’ll be done upgrading every one of its server locations by the end of 2021. As such, it’ll soon be 100% trustworthy.

Pricing: NordVPN is priced very competitively. The provider’s current 1-month subscription rate is $11.95, which is lower than its closest competitors. I’d have to say this is great because you’ll be able to get yourself a premium VPN service provider without having to pay premium prices.

Torrenting Capabilities: ExpressVPN makes torrenting easy with its network of 3000+ servers that are all P2P-enabled and leak-free. In addition, most of the VPN service’s locations have superb speed capabilities. In fact, even the ones located very distantly from me made an extremely minimal impact on my base web connection speeds while I was using Vuze.

Privacy & Security: The security capabilities of ExpressVPN are generally held by experts in very high regard. Why so? It was the first major virtual network to have a RAM-based server network. Moreover, it was one of the first to have itself subjected to regular third-party audits.

Unfortunately, the developers of ExpressVPN haven’t focused on features. They have yet to give their VPN a dedicated ad & malware blocker. Aside from that, they haven’t provided an automatic kill switch for their iOS applications or come up with any unique offerings.

Pricing: ExpressVPN is one of the world’s best VPN service providers. Hence, it shouldn’t be surprising that it doesn’t have the cheapest rates. To avail of the provider for a month, you will need to shell out $12.95. Although this price may seem rather steep, you should remember all the things that you’ll be getting with the subscription that you’ll be paying for.

Torrenting Capabilities: My personal go-to for torrenting with Vuze is Surfshark. Each one of its 3200+ servers is P2P-enabled. Via testing, I’ve discovered that all of these servers do not leak when used for torrenting. More importantly, they are blazingly fast, being able to maintain my base connection speeds under any circumstance.

Privacy & Security: Just this year, the people behind Surfshark have managed to establish a server network that’s completely RAM-disk-enabled. Because of that, you can be certain that your data will remain in safe hands while you’re connected to any of the VPN’s many servers.

It should also be noted that Surfshark utilizes AES encryption and supports all the protocols that you’d want to use while downloading on Vuze. Furthermore, the provider also has user-friendly apps and extensions that are loaded with must-have features like an automatic kill switch.

Pricing: Surfshark’s monthly plan costs $12.95, which is just as expensive as ExpressVPN’s.

That said, this subscription offers greater monetary value. Why so? It entitles you to unlimited simultaneous connections. If anything, this is great as it will be possible for you to safeguard and anonymize everyone you know whenever they download torrent content using Vuze.

Torrenting Capabilities: CyberGhost is an excellent choice for Vuze. It has the largest server network of any VPN. As such, it’s sure to have more than enough servers to meet all of your torrent downloading needs. Besides that, it wouldn’t be right not to mention that connection speeds won’t be a problem with CyberGhost as my tests show that it’s a very fast service.

Sadly, even with more than 7500 servers at its disposal, CyberGhost cannot bypass the Great Firewall of China. Thus, it’s not the best option for frequent travelers.

Privacy & Security: You have nothing to worry about when it comes to privacy and security as you’re using CyberGhost. The VPN has a concrete no-logging policy. Also, it utilizes AES-256 military-grade encryption and maintains open support for all major protocols. Finally, its apps are not difficult to use at all and are equipped with all the security features you’d ever need.

Pricing: CyberGhost was once the champion of budget VPNs. Sad to say, this is no longer the case because the provider has recently updated its prices for the worse. Today, you’ll need to shell out a hefty $12.99 for a basic 1-month subscription plan.

Of course, we wouldn’t include CyberGhost on this list if we thought that it wasn’t a good deal. If anything, the provider still offers incredible value considering everything that it offers.

Torrenting Capabilities: Private Internet Access (PIA) is the last Vuze VPN that we’ll discuss but it definitely isn’t the least. The provider has 3300 servers. All of which are P2P-enabled, meaning they’re suitable for torrenting. And yes, my tests prove that they don’t leak data.

When it comes to speed, PIA is fast. Nevertheless, it isn’t the fastest provider around. Still, it’ll suffice when you utilize it for downloading all kinds of content on Vuze.

Privacy & Security: Private Internet Access is based in the United States, which is a country that’s a founding member of the Five Eyes Alliance. Despite that, online security experts are nearly universal in stating that the provider can be trusted with all your private information.

Like all the other providers on this list, PIA makes use of AES military-grade encryption. Aside from that, it also supports all major protocols including WireGuard. Another thing to mention is that the provider has applications that are built with a kill switch and an ad & malware blocker.

Pricing: Private Internet Access has always been an incredibly budget-friendly VPN. You may currently get it for a month by paying just $9.95. If you ask me, this is an incredible deal especially when you consider that all of its servers are secure and P2P-enabled.

How To Use Vuze With A VPN

Download Torrents Anonymously: Torrenting without a VPN opens up your device to hackers that may turn you into a victim of all sorts of crimes. In addition, it also opens you up to monitors that conduct unwanted surveillance on you.

A capable VPN provider will maintain your anonymity by hiding your real IP address. How? By replacing it with that of one of its server’s. In doing so, even the most well-equipped malicious parties will find it next to impossible to compromise your anonymity as you download torrents.

Because of that, access to the websites of Vuze and other torrent clients is restricted in many parts of the world. Depending on where you’re located, your only way to access such sites is through the use of a VPN service provider or a proxy.

Proxies are not recommendable. Apart from not being able to consistently bypass geoblocks, they also can’t provide edge-to-edge digital protection. Why so? They only function locally on the browser level. Furthermore, they fail to completely hide your IP address.

Enhance Your Privacy & Security: Virtual private networks are built to fortify your privacy and security when you surf the internet. They often utilize military-grade AES encryption together with secure VPN protocols to encrypt your private data. Also, they’ve got no-logs policies preventing them from ever compromising the personal information of their users.

Improve Internet Connection Speeds: Most VPNs slow down your internet connection speeds after you connect to their servers. However, some providers manage to improve your online connection by eliminating bandwidth throttling.

How To Use A VPN for Vuze

If you don’t know how to use a VPN with Vuze, simply follow these steps:

Kick things off by getting a capable VPN service provider. There are literally hundreds of options available for you to choose from.

You can even get yourself a free provider if you’ve got zero money to spend. Needless to say, we don’t recommend free VPNs because they’re often lacking when it comes to infrastructure that is necessary to facilitate safe torrenting.

By sticking with any of the five providers that we discussed, you’ll be making sure that you won’t end up disappointed. After all, every single one of them is fully capable of meeting your needs when it comes to downloading content on Vuze or any other mainstream torrenting client.

Your next priority should be to install the VPN that you just bought. On most operating systems, this step is as simple as hitting the download button then waiting.

Sad to say, installing a VPN on a router is a bit trickier. The procedure requires you to have a bit of technical know-how. Nevertheless, those who aren’t tech-savvy aren’t completely out of luck since some of our top VPNs for Vuze sell pre-configured routers that you may plug and play.

Turning on your VPN provider’s kill switch is essential before you engage in a torrenting session on Vuze. When that’s not done, you only leave yourself at risk of being hacked and observed.

A kill switch is a security feature that’s now standard for VPNs. It cuts your device’s connection to the internet if its connection to your provider’s server gets compromised. By doing this, it protects you from accidentally getting exposed while you’re torrenting on Vuze.

Once you’re done activating your VPN’s kill switch, you may finally pair with a server. Between the thousands of locations that your provider has, you should go with the closest P2P server. That way, you’ll be guaranteed to have the best possible web connection speeds.

After you’ve done every step mentioned above, there’s nothing left for you but to open Vuze and start using it. During your torrenting session, you must remain connected to your VPN’s server as disconnection can instantly lead to you being detected by hackers.

How We Ranked These VPNs

Our rankings did not come about overnight. We had to conduct a lot of research and tests in order to properly discern which providers were worth getting for Vuze. Following that, we compared the prices of our picks to determine which ones provided the best value.

Here’s a summary table of all the VPNs for Vuze that we talked about: