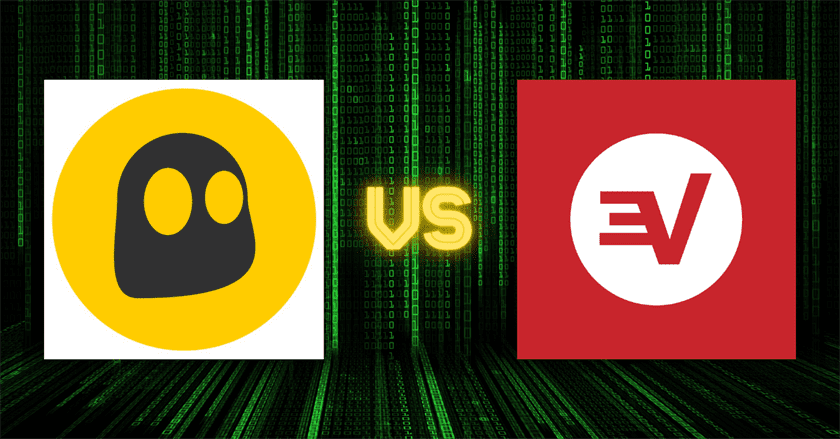 ExpressVPN is one of the most popular VPN services. A close competitor is CyberGhost, which also has a large user base. The two have great quirks and features that make it difficult for many to pick between them.

To understand why ExpressVPN is better, it’s necessary to dig deeper. We must discuss all that each has to offer. For a better read, I’ll divide everything into categories with a winning service for each one.

We’ll begin with an overview of all the CyberGhost and ExpressVPN have to offer. Refer to the table below:

Despite their similarities, a lot of things set the two apart. As such, it’s a must that we take a closer look at them. The first thing we’ll talk about is privacy and security!

CyberGhost and ExpressVPN are based in two very different places. The former operates from the British Virgin Islands while the latter from Romania.

Despite their geographical distance, the two locations share one thing in common – they don’t fall under Five Eyes Alliance jurisdiction. Due to that, neither VPN is hindered by any restrictive copyright and privacy laws.

ExpressVPN and CyberGhost support mainstream protocols like OpenVPN (UDP & TCP) and IPSec (LT2P & IKEv2). The difference is that CyberGhost only supports OpenVPN on Smart TVs, Android, Linux, and Windows. It also exclusively supports IKEv2 on iOS, macOS, and Windows.

You should note that ExpressVPN supports the beta version of Lightway Protocol while CyberGhost doesn’t. Instead, it has support for WireGuard, which is arguably the newest and best VPN protocol available.

Absolute leak protection is something that both VPNs claim to provide. I had to know if this is true, so I conducted tests using IPLeak.net. To start, here’s a screenshot of the results without any VPN running:

Now here’s what happened after I connected to CyberGhost’s server in Singapore:

Finally, this is the outcome following my move to ExpressVPN’s corresponding server:

As expected, both VPNs were able to hide my IP address. For that reason, I can depend on them to keep me anonymous whenever I go online.

Unprotected servers can be infiltrated by hackers that aim to steal your data. Hence, your VPN provider must prioritize server security.

In this regard, ExpressVPN has the advantage, with it running its entire network in RAM-disk mode. For those that don’t know, a RAM-disk server is incapable of storing logs. Even when seized, information can’t be stolen from it.

No plans have been announced by CyberGhost to transition to a RAM-disk network. Because of that, it can’t be fully trusted to not keep your logs.

My winner for this round of our CyberGhost vs ExpressVPN match is ExpressVPN. I chose it as it supports OpenVPN and IKEv2 on more platforms. Additionally, the service also runs all its servers in RAM-disk mode.

While CyberGhost has many awesome security features, it comes in shorthanded due to its lack of UDP, TCP, and IKEv2 support on certain platforms. Moreover, it doesn’t have a RAM-disk network that fully prevents it from collecting logs.

VPNs slow down your internet at varying rates. Thankfully, CyberGhost and ExpressVPN are known to have a minimal effect on connection speeds. In fact, the two have a reputation for being some of the fastest services available.

To determine which VPN service has better speed capabilities, I ran a few tests. Before seeing the results, let’s first look at my base connection:

Here’s how CyberGhost’s server in Singapore affected it:

And this is the outcome after I moved over to ExpressVPN’s counterpart server:

The test results from both services were satisfactory. ExpressVPN did better than CyberGhost, with good download speeds and a lesser hit on my ping. However, it did not manage to boost my upload speeds, which surprised me.

Both VPNs actively encourage torrenting on their servers. Unfortunately, only ExpressVPN boasts a fully enabled P2P server network. To make up for this, CyberGhost maintains a list of suitable servers for torrenting on its desktop apps.

I wanted to check if both services could protect me from leaks as I torrent. To do so, I ran some tests. Here are the results without me using any VPN:

This is the result following my pairing to CyberGhost’s Hong Kong server:

And this is how ExpressVPN’s HK server did:

Neither VPN failed to mask my IP address as I torrented. They’ve proven that they’re capable of protecting me whenever I partake in a session. Nevertheless, my winner for this round is ExpressVPN because it is faster, and all its servers are P2P-enabled.

A lot of people use VPNs exclusively for streaming purposes. Hence, this category is a crucial one in our ExpressVPN vs CyberGhost match.

Reports state that ExpressVPN is excellent for streaming. It can bypass the geoblocks of all major streaming platforms with ease and consistency. The service has even created a list of each service it’s able to unlock. If anything, this shows just how confident it is with its abilities.

Many have said that CyberGhost does as well as its competitor. The VPN provides access to almost any website. It even allows you to choose a specialized streaming server to use for all your media consumption needs.

Since Netflix is the world’s top streaming platform, I used it to see what each VPN service can do. The first service that I tried was CyberGhost. Below is the result after I linked to its optimized US server to watch Spotlight:

And here’s the result after I tried to access the same title on ExpressVPN’s corresponding US server:

The two VPNs did as well as each other. Both were able to stream the movie in full resolution without buffering.

Still, my winner in this round of CyberGhost vs ExpressVPN is ExpressVPN. The reason why is because it’s faster and capable of bypassing the geoblocks of more streaming services.

I must have a VPN that protects me whenever I play Call of Duty Mobile. To see if ExpressVPN and CyberGhost fit the bill, I used them while I fought several matches.

My experience with CyberGhost wasn’t decent. The service caused the game to lag every other minute or so. Due to it, I didn’t perform as well as I normally do. Even my teammates noticed and said that I was pulling them back, which was embarrassing.

Transferring to ExperssVPN turned my game around. Frame drops and lag became completely nonexistent. My game ran so smoothly to the point that I even forgot I was using a VPN.

ExpressVPN and CyberGhost are compatible with many operating systems. They both also have browser extensions. However, only one can be victorious in this round of ExpressVPN vs CyberGhost.

Below is a table that shows what each VPN works on:

My winner is ExpressVPN, as CyberGhost doesn’t have an app for Chromebook. Although users can still tap into the service with a router, it would be nice if a native app existed.

VPNs that allow more simultaneous connections provide more value. They’re also better suited for business owners and those with large households. After all, who wouldn’t want to keep everyone protected with just one account?

CyberGhost takes the lead, permitting its users to pair 7 devices at the same time. Meanwhile, ExpressVPN only allows for a maximum of 5. Though the difference is negligible, it can be a deal-breaker, especially for those that wish to keep more safeguarded with one account.

The network of ExpressVPN is impressive as it has more than 3000 servers. Unfortunately, it falls short when compared to CyberGhost, which has the largest network of any VPN. The service boasts more than 7000 servers, making it capable of keeping more users anonymous.

Chinese internet censorship is something that ExpressVPN can overcome. The VPN provider is such a problem for the authorities in China that it got banned. Still, using it in the country isn’t illegal and can be done if you download it before going there.

In comparison, reports state that CyberGhost cannot bypass the Great Firewall of China. The reason why is because it doesn’t utilize VPN obfuscation technology. As such, it’s not the best choice if you’re planning a trip to the country.

ExpressVPN and CyberGhost have remarkably different apps. All of which are not difficult to download, navigate, and use.

Upon opening it, the first thing you’ll see on CyberGhost’s Windows app is a connect button. On the side is an expandable tray that leads to a list of NoSpy, torrenting, streaming, and favorite servers. It’s also there where you can access the settings and create your IP address.

The Windows app of ExpressVPN takes on a minimalist approach. You’ll immediately notice a large quick connect button. On the upper right is a three-line icon that provides access to the settings and a full list of servers.

My preference lies with ExpressVPN because its app has a cleaner look. It doesn’t bombard me with information, unlike CyberGhost’s. For that reason, the service wins this round in our battle between ExpressVPN and CyberGhost.

CyberGhost has a lot of unique features. It utilizes data compression on Android, which lets the VPN’s app run on that platform smoother. The service’s iOS app also has a secret photo vault. With it, users can hide images they don’t want others to see.

Something it has along with ExpressVPN is split tunneling. Using it, you’ll get to give selected apps and services access to your personal information. There’ll be no need to turn off the services and become unprotected, even for a moment.

Besides what’s stated, CyberGhost also has two paid add-on features. First is a password manager that rids the need for you to remember all the passwords of your various accounts. The second is called Dedicated IP. With it, you’ll be able to create a personal IP address.

The additional features that each VPN has are great. However, my winner for this round is CyberGhost because it’s got more to offer.

I contacted ExpressVPN via chat to ask if the VPN had unlimited bandwidth. The representative that attended to me was very quick. She gave a detailed answer, which pleased me.

My experience with CyberGhost was equally as good. I asked the same question and got a detailed answer within 5 minutes. As anticipated, the individual that attended to me acted cordially.

To see what each service offers when it comes to customer support, look at the table below:

As you can see, ExpressVPN has the edge over its competitor because it has video guides available. Furthermore, the service also boasts faster average response times.

Price is a major thing to consider when choosing a VPN. ExpressVPN and CyberGhost are competitive in this regard. To see what deals each offer, refer to the table below:

My winner for this round is CyberGhost. I choose it because it’s drastically cheaper to use for those that opt for a 1-year, 2-year, or 3-year plan. On top of that, the VPN has a 14-day (for a 1-month subscription) and 45-day money-back guarantee.

Is CyberGhost better than ExpressVPN?

No. ExpressVPN is far more superior because it has excellent security, is faster, more optimized for torrenting, and better at working around geoblocked content. Moreover, it’s capable of getting around Chinese censorship.

Don’t get me wrong. CyberGhost is a wonderful service. Sadly, it fails to match its competitor in all the key categories. Despite that, I’d still recommend it to those who are looking for a great bargain as the VPN offers great value for your money.