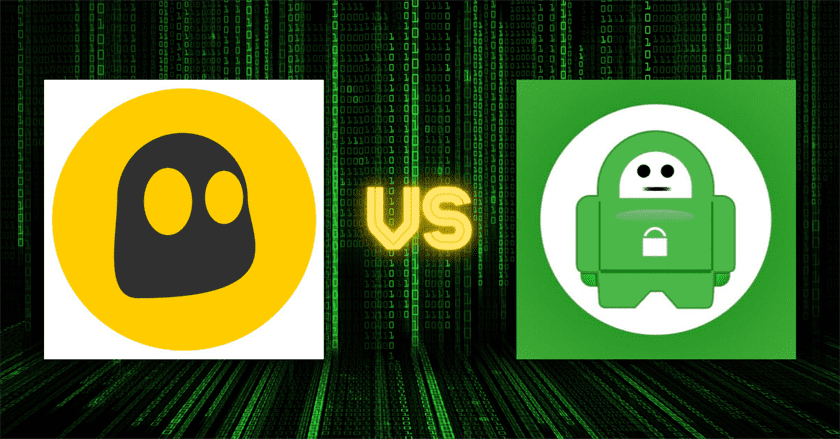 The VPN industry is filled with competing services. CyberGhost and Private Internet Access (PIA) are among the most famous. Each has wonderful features, excellent customer service, competitive prices, and user-friendly apps. Moreover, they’ve also launched broad marketing campaigns that have transformed them into household names.

I’ve used the two services extensively to see which is superior. My conclusion is that PIA is better than CyberGhost. To understand why, it’s necessary to take a closer look at everything both have to offer.

We’re going to start with a thorough overview of everything that CyberGhost and PIA have to offer. Please refer to the comparative table below:

It’s evident that the two have many things that set them apart from one another. Hence, we must dig deeper to know what’s best for you. Let’s first discuss security and privacy!

Private Internet Access is based in the US, putting it under the jurisdiction of the Five Eyes Alliance. Due to that, its operations are hindered by restrictive copyright and privacy laws. In comparison, no such thing sets CyberGhost back as it’s headquartered in Romania, which is a VPN-friendly country.

Both services utilize AES 256-bit military-grade encryption, SHA-256 hash authentication, and a 4096-bit RSA handshake. Setting PIA apart is its use of AES-128 as a backup in case its primary encryption becomes compromised.

CyberGhost and PIA support standard protocols like OpenVPN (UDP & TCP) and IPSec (L2TP & IKEv2). Note that CyberGhost only supports OpenVPN on Android, Windows, Linux, and Smart TVs. It also has limited IKEv2 support, with it being available exclusively on iOS, Windows, and macOS.

PIA doesn’t support IKEv2 on any platform. However, the service makes up for this by supporting WireGuard everywhere.

Leak protection is something that both VPNs claim to provide. To make sure their claims are true, I decided to run some tests using IPLeak.net. Below is a screenshot of my results without using any service:

Here’s how CyberGhost and its Singapore server did:

And this is how PIA’s counterpart server performed:

The test results from the two VPNs were satisfactory. My IP address was masked without any effort. Because of that, I can trust both services to keep me 100% anonymous when I surf the internet.

Neither VPN runs its servers in RAM-disk mode, which makes storing logs impossible. The good thing is that Private Internet Access has announced plans to upgrade its entire network. The same cannot be said for CyberGhost that hasn’t disclosed anything of that sort.

Privacy and security are two things that PIA and CyberGhost excel at providing. Still, only one service can win this category. My vote goes to PIA because it supports WireGuard and has reported its intention to soon transition to a RAM-disk network.

All VPNs have an adverse effect on your internet speeds. Fortunately, many say that PIA and CyberGhost are quick VPNs that don’t slow connections too much.

The only way to know which service is faster is to test them out. Before seeing the results, look at my base connection first:

Now, this is how CyberGhost’s SG server affected it:

And here’s how PIA’s server in the same location did:

I was surprised to find out that PIA is faster than CyberGhost. The service had a lesser impact on my ping, download, and upload speeds. Due to that, it’s the winner in this round of our CyberGhost vs Private Internet Access battle.

CyberGhost and PIA actively encourage torrenting on their servers. PIA has even got a fully enabled P2P network that makes it optimized for the job. Although not all of CyberGhost’s servers are P2P enabled, it compensates by providing a list of servers that specialize in torrenting on its app.

To ensure that both VPNs are capable of safeguarding me as I torrent, I conducted a few tests. Here’s the result without any VPN in use:

Here’s the outcome after I linked to CyberGhost’s optimized Hong Kong server:

Finally, this is the result after my movie to PIA’s SG server:

Neither service failed at hiding my IP address during the tests. As such, they’ve proven that I can rely on them to keep me protected whenever I download torrents. With that said, the victor of this round is PIA once again. I chose it because it’s faster and has a fully enabled P2P server network.

I’m a movie buff that must have a VPN with strong streaming capabilities.

My experience with CyberGhost has been nothing but good. The service lets you select from a list of servers that specialize in streaming. It even says what streaming platforms those servers can unlock.

On the other side of the spectrum is Private Internet Access. It’s unreliable as it can only bypass the geoblocks of a few websites. Servers that can access content don’t even do so with consistency. If anything, my use of PIA for entertainment purposes has only led to frustration.

No other platform is as popular as Netflix. Due to that, it was only natural that I used it to see what each service can do. The first VPN that I used was CyberGhost. Below is the result after I attempted to watch Spotlight on its optimized US server for Netflix:

This is the outcome after I accessed the same title on PIA’s New York server:

Both services were able to stream the movie in full resolution. Sadly, only CyberGhost was able to perform without buffering. At first, PIA was doing alright, but after a few minutes, it started a cycle of loading and streaming.

The winner of this round in our PIA vs CyberGhost match is CyberGhost. It allowed me to watch in top quality with no hassles at all.

A VPN allows gamers to play with people around the world. It also keeps them protected while they do so. To see how good Private Internet Access and CyberGhost are for gaming, I used both while I fought matches on Call of Duty Mobile.

CyberGhost did well since it didn’t cause the game to break. Lag and frame drops were almost nonexistent. In all honesty, the service made me feel like I was playing without any VPN.

Switching to PIA wasn’t the best decision. The service caused horrible frame drops that made the game almost unplayable. Because of it, I dragged my team down and caused us to lose. As such, I wouldn’t recommend it for gaming purposes.

You can use CyberGhost and PIA on a wide range of devices. The developers of both VPNs made sure they’re available to as many people as possible. For a better understanding of what the two are compatible with, check out the table below:

PIA has a browser extension for Opera while CyberGhost does not. The service is the winner of this category for this reason.

All-encompassing compatibility is useless if your VPN doesn’t permit you to link to all your gadgets simultaneously. Thankfully, CyberGhost and PIA allow for some of the most simultaneous connections in the industry.

PIA lets you connect a maximum of 10 devices under one account. In comparison, CyberGhost only allows you to pair 7. Hence, it’s the loser of this round.

CyberGhost has the most servers of any VPN. It operates more than 7000 across the world, making it excel at maintaining its users’ anonymity.

While it boasts a smaller network, Private Internet Access is by no means a tiny VPN. The service has 3300+ servers around the globe. Nevertheless, it still comes up short when compared to CyberGhost.

The Great Firewall of China is a challenge that few VPNs can overcome. PIA and CyberGhost are both incapable of consistently bypassing it. Even if they’ve got the necessary tools for the job, neither can do it with success.

However, you should note that PIA has occasionally been reported to work in China without issues. Because of that, the service is the winner of this category. Still, I would not recommend it if you’re going to the country.

The most striking difference between CyberGhost and PIA can be found in their apps. Both of which are user-friendly and easy to install.

After opening CyberGhost’s Windows app, you’ll immediately see a quick-connect button, which pairs you to the best server according to your location.

On the side is an expandable tray that’ll show the rest of the app. There, a full list of servers and ones that specialize in streaming, torrenting, and security can be seen. The settings and your account info are also visible.

PIA’s app for Windows opens from and minimizes to the system tray. Upon starting it, you’ll also first see a quick-connect button. The complete list of servers can be accessed by clicking the “VPN SERVER” button. A three-dot icon on the top right corner is where you can get to the settings.

I like the apps of both VPNs. However, my preference goes to CyberGhost because it’s more pleasing to my eyes. Moreover, it also lists down special servers that I can tap into whenever I need a particular task done.

CyberGhost is one of the most feature-rich VPNs out there.

First, it has data compression on Android that makes its app lighter and run more smoothly. The service also has a secret photo vault for iOS, where you can hide all your pictures. In addition, it has split tunneling that lets you give certain websites and services access to your real info without having to turn the VPN off.

On top of everything, CyberGhost also has two paid add-on features. You can get something called Dedicated IP that lets you create a personal IP address. Besides that, a password manager that makes logging into your social media accounts easy is available.

Private Internet Access has PIA MACE, which is the VPN’s own proprietary adblocker. Furthermore, it also has split tunneling to give you an entirely new degree of convenience.

The victor in this round of our CyberGhost vs PIA match is CyberGhost. I picked it because it has more additional features to offer. Most of which are not available on any other VPN service.

To know what CyberGhost and PIA offer in terms of customer support, refer to the table below:

PIA and CyberGhost offer the same things when it comes to customer support. Nevertheless, the winner in this category is PIA because it has a faster average response time. Send them an email, and you’ll get an answer in less than an hour. This shows just how much the VPN values customer service.

PIA is famed for being a quality VPN that’s affordable. It’s one of the cheapest services on the market, making it perfect for those on a budget. In comparison, CyberGhost has been said to have average prices. It isn’t expensive, nor is it cheap.

To fully grasp how much each service costs, check out the table below:

While CyberGhost is more expensive, it has more flexible plans. Additionally, it also has a longer money-back guarantee. Hence, you can try it without risks for longer. That said, the winner in this final round of our Private Internet Access vs CyberGhost match is PIA.

Is CyberGhost better than PIA?

No. Although this is a really close call, I can say that PIA is better than CyberGhost.

First, it’s got better security, which is the most important thing a VPN must be good at. On top of that, it is faster and has a P2P network that makes it optimized for torrenting. Furthermore, the service is compatible with more devices and allows for more simultaneous connections. Lastly, it’s occasionally able to bypass the Great Firewall of China.