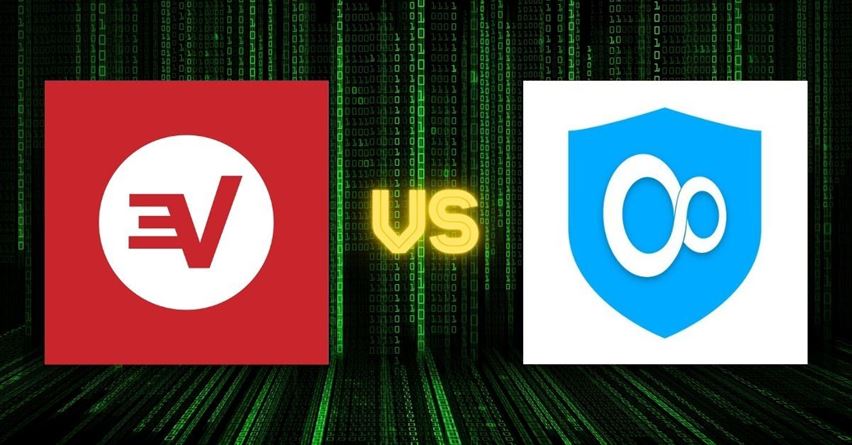 ExpressVPN is the world’s most popular VPN solution. Often, it’s compared to VPN Unlimited, which is another famous VPN. The universal consensus is that the former is superior to the latter.

For starters, here’s a comparative table showing the specifications of each:

At first glance, the two are nearly indistinguishable. However, as you probably already know, the devil lies in the details. Let’s review each VPN service thoroughly.

ExpressVPN operates from the British Virgin Islands. Meanwhile, VPN Unlimited’s headquarters is located in the United States. As such, it falls under the Five Eyes jurisdiction, meaning that its activities are heavily restricted by cumbersome copyright and privacy laws.

Both services utilize AES-256 encryption and a 4096-bit RSA handshake.

What differentiates them is that ExpressVPN employs SHA-512 hash authentication while VPN Unlimited uses SHA-256, which is almost identical and just as secure.

The two let you toggle OpenVPN (UDP & TCP) along with IPSec (LT2P & IKEv2). Setting them apart is ExpressVPN’s support for Lightway and VPN Unlimited’s for KeepSolid Wise, both of which are proprietary.

Also, the protocols that VPN Unlimited supports vary by platform. Hence, it keeps some devices more secure than others.

Here’s how ExpressVPN’s Singapore server did after I tested it for leaks using IPLeak.net:

Now, this is how VPN Unlimited’s same location server performed:

As seen above, both are fully capable of masking IP addresses. Due to that, each can be trusted to safeguard your anonymity wherever and whenever you go online.

VPN Express doesn’t have a RAM-based network, while ExpressVPN does.

Thus, only the latter is incapable of keeping your private data. If anything, its strict no-logs policy is the one thing preventing the former from doing so.

The security capabilities of ExpressVPN are clearly superior to its competitor’s. It supports all major protocols on all the devices it is compatible with and has a RAM-based VPN server network. Besides that, it’s also not based in a Five Eyes Alliance country. So, it is the winner in this ExpressVPN vs VPN Unlimited round.

Below is a screenshot of my speed test while using ExpressVPN and its Singapore server:

And here’s the outcome following my transfer to VPN Unlimited’s corresponding server:

The faster VPN service between the two is VPN Unlimited. Moving to it brought down my ping as well as increased my download and upload speeds. Don’t get me wrong, though, since ExpressVPN is also really fast. Sad to say, it falls short versus its competitor.

ExpressVPN boasts a fully enabled P2P network. Unfortunately, the same can’t be said for VPN Unlimited, which only has a set of optimized servers. That said, both services allow their users to download torrents on their networks and claim to not leak.

Here’s how ExpressVPN’s Hong Kong server did after I tested it for torrenting leaks:

This is how VPN Unlimited’s counterpart server performed:

Although neither service failed my tests, the winner of this category is ExpressVPN. Why? Its entire network has been optimized for torrenting. All its servers are P2P-enabled, meaning downloading while connected to anywhere is possible.

VPN Unlimited and ExpressVPN are both known for being able to easily bypass streaming website geoblocks. The two don’t have trouble granting access to the foreign libraries of Amazon Prime, BBC iPlayer, Netflix, Hulu, and other popular sites.

Below is a screenshot of the result of my attempt to watch Spotlight using ExpressVPN’s server in the US:

Now, here’s how VPN Unlimited’s dedicated streaming server in California did after I tried to view the same movie:

The winner of this category is ExpressVPN because I had a better viewing experience while using it. While it’s faster, VPN Unlimited caused me to suffer from issues with quality and buffering. Also, it made accessing Netflix take a little longer than usual. So, it's the winner in this VPN Unlimited vs ExpressVPN round is ExpressVPN.

On paper, both seem like excellent VPN solutions for gamers. However, only ExpressVPN was able to meet my expectations.

During my Call of Duty Mobile matches, it was the only one that didn’t introduce problems with lagging and frame drops. For that reason, it is the winner in this very important category of our match.

Please refer to the table below to see which operating system and browser extension each VPN service is compatible with:

As seen, ExpressVPN is compatible with Chromebook OS and Tor, while its competitor isn’t. In comparison, VPN Unlimited has extensions for Microsoft Edge along with Opera. Even so, it’s still at a disadvantage since few people actually use the two browsers daily.

VPN Unlimited and ExpressVPN both have a limit of 5 simultaneous device connections.

In the industry, this number is standard. Nevertheless, you should know that a lot of other services allow you to connect more gadgets concurrently.

Consisting of over 3000 servers, ExpressVPN’s network dwarfs that of VPN Unlimited, which only has a little more than 500 servers. Because of that, the former service is the winner of this category by default.

Reports state that ExpressVPN and VPN Unlimited work in China. But, only ExpressVPN can leap over the Great Firewall with consistency. Its competitor is said to frequently suffer from downtime. Hence, it’s not the best tool to have in the country. Therefore, the winner in this VPN Unlimited vs ExpressVPN battle is ExpressVPN.

ExpressVPN’s apps all take on a minimalistic approach. After opening them, you’ll instantly see a quick-connect button. Under that are tabs wherein you can select different servers. The three-line icon on the top right corner is where you can access everything else on the apps.

The apps of VPN Unlimited are the opposite of ExpressVPN’s. When compared, you’ll notice they’re “bigger”. Furthermore, using them doesn’t usher in a great experience. That’s mainly because they’re clunky and unresponsive.

ExpressVPN doesn’t have any exclusive features. Nevertheless, it does boast security features that its competitor doesn’t have. Prime examples include a kill switch for every platform except iOS and split tunneling on devices apart from Android.

On the other hand, VPN Unlimited lets you utilize two-factor authentication. Also, the service allows you to create your VPN server and IP address without charge.

Below is a table showing what each service offers in regards to customer service:

As seen above, the customer service of ExpressVPN is better. Besides having video tutorials that may DIY troubleshooting easy, it also has a faster average response time.

Please refer to the table below to see the pricing options each VPN offers:

VPN Unlimited stands out because it’s one of the few VPN providers that offer a lifetime subscription. Furthermore, it’s also extremely affordable, being within the reach of any consumer who’s got a small budget.

In comparison, ExpressVPN is known for being rather pricey. As a matter of fact, it’s one of the most expensive services in the market. Hence, it’s not ideal for those looking to save. So, VPN Unlimited is the winner in this ExpressVPN vs VPN Unlimited battle.

Is VPN Unlimited better than ExpressVPN?

No. ExpressVPN is superior to VPN Unlimited in many ways. It has better security, applications, customer service, torrenting capabilities, and compatibility. On top of that, it’s more reliable for use in China and has a larger network.

With that said, VPN Unlimited is, without a doubt, a great VPN. I’d still recommend it over its competitor to anyone who doesn’t have much to spend.