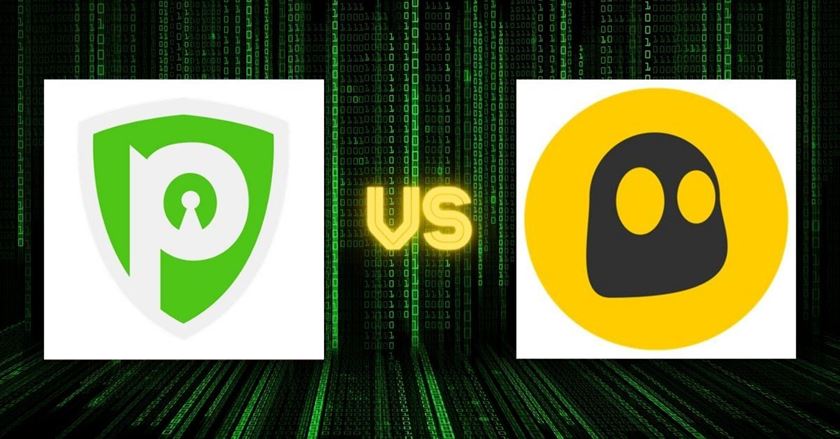 PureVPN is one of the best VPN services around according to many. It’s often compared to CyberGhost since the two have lots of similarities. With that said, experts are almost unanimous in saying that PureVPN is better.

To kick things off, here’s a table showing everything both have to offer:

While they’ve got many things in common, lots of stuff also set PureVPN apart from CyberGhost VPN. As a potential user of either, you need to dig into the details before making a purchase. As such, let’s begin by reviewing the two VPN provider’s privacy and security capabilities.

PureVPN operates from Hong Kong, while CyberGhost operates from Romania. Although these two places couldn’t be more different, they do share one thing. Both are VPN-friendly since they’re not under the jurisdictions of the Five, Nine, and Fourteen Eyes Alliances.

The two utilize military-grade AES 256-bit encryption. One thing unique about CyberGhost VPN, though, is that it also uses SHA-256 hash authentication and an RSA 4096 key exchange.

OpenVPN (UDP & TCP), IPSec (L2TP & IPSec) are supported by PureVPN and CyberGhost. A thing you should be aware of, though, is that CyberGhost only lets you toggle these protocols on select platforms. Hence, users of some devices might find themselves left out.

Besides what’s stated, PureVPN lets you toggle SSTP and PPTP, while CyberGhost allows you to use WireGuard on Linux. Thus, using either VPN service, you’ll surely have enough protocol options to choose from.

Here’s a screenshot of the results of my leak test on PureVPN while paired to its Japan server:

This is the result after I tested CyberGhost and its server in Singapore:

I was pleased to see that both VPNs managed to hide my real IP address. By doing so, they’ve proven their trustworthiness. From now on, it’s now possible for me to wholeheartedly recommend both to anyone who values their anonymity.

CyberGhost VPN and PureVPN don’t have RAM-based servers that are incapable of keeping logs. On the bright side, both maintain firm no-logs policies. Therefore, when using them, you can be certain your private information is in safe hands.

PureVPN and CyberGhost are, without a doubt, safe VPNs to use. However, the winner of this category of our match between the two is PureVPN. How come? Because it supports more protocols on more platforms. In addition, it also has more servers, as we’ll discuss later.

Lots of people say that PureVPN has decent speed capabilities. Meanwhile, its competitor can also provide users with a decent connection that’s not as good. To determine which VPN is faster, I ran some tests. Here’s the result after I paired to PureVPN’s Japan server:

Now, this is how CyberGhost’s Singapore server performed:

The difference that both services VPN made to base connection was very minimal. Needless to say, PureVPN didn’t cause my ping to go up while CyberGhost did. Thus, it’s the winner of this round of our PureVPN vs CyberGhost VPN match.

PureVPN and CyberGhost both lack a fully enabled P2P network. Thankfully, the two each have large sets of optimized servers that can be used for torrenting. In addition, they’re both fully compatible with all leading torrent clients such as Vuze, Deluge, and uTorrent.

I wanted to know if both VPN providers could let me download safely. Because of that, I ran a torrenting leak test while connected to a P2P server of theirs. Here’s how PureVPN did:

CyberGhost and PureVPN both managed to safeguard me from leaks as I torrented. Due to that, I may now recommend them to anyone who frequently torrents.

Be that as it may, the winner for this round is CyberGhost. The reason why is because all its apps provide a comprehensive list of torrenting servers that you can readily pair with.

CyberGhost also provides a list of servers that are suitable for streaming on its apps. It even tells you what streaming services they unlock. From a convenience standpoint, this is simply wonderful as there’ll be no more need to play any pesky guessing games.

Sad to say, PureVPN doesn’t list down what servers it has that unlock streaming services on its apps. Instead, it does this on its website, which takes away the convenience factor.

No other streaming service is as popular as Netflix. For that reason, it was essential for me to know if CyberGhost and PureVPN could work alongside it. Below is a screenshot showing the result of my attempt to watch Spotlight using PureVPN and its US server:

And this is the result after I tried to watch the same movie while connected to CyberGhost VPN and its dedicated streaming server in the same country:

Both services did well. They bring down resolution quality or cause Netflix to suffer from issues regarding buffering. As such, I’m now ending this significant round of our PureVPN vs CyberGhost VPN comparison with an anti-climactic tie.

PureVPN and CyberGhost both served me well while I was gaming. Neither service caused me to experience any issues with lagging when playing Call of Duty Mobile. However, I must say that the latter VPN made my frames drop during the most hectic parts of my matches.

Below is a table showing what each VPN works on:

As you can see, PureVPN and CyberGhost are compatible with all the same operating systems and web browsers. Due to that, I’m again forced to end a round with a tie.

CyberGhost VPN allows for a maximum of 7 simultaneous device connections. In comparison, its rival allows you to pair up to 10 devices at the same time with one account. Hence, it’s the loser of this round of our CyberGhost vs PureVPN match.

PureVPN and CyberGhost come very close to each other in this category. The former operates more than 6500 servers whereas the latter maintain just over 7000 servers.

China’s internet censorship measures are a challenge for all VPN services. Luckily, PureVPN can bypass them with relative ease and consistency. Sadly, the same can’t be said for CyberGhost, which isn’t capable of working in China under any circumstance.

The apps of PureVPN lack refinement. All of them have a clunky and unresponsive vibe that makes them unsuitable for those who lack patience. On the bright side, they look really good and are easy to download then install.

CyberGhost’s apps are user-friendly. However, they’re not light on memory except for the service’s native Android app. With that said, they are all significantly better than anything that PureVPN offers. Thus, CyberGhost is the winner of this category.

PureVPN one free exclusive feature called Secure Wi-fi. It basically keeps you protected after you pair to a public wifi hotspot.

Apart from what’s mentioned, PureVPN also lets you establish an IP address and add another layer of security via DDoS protection as well as port forwarding. One problem is that you can’t avail of all these features for free since they’re all paid add-ons.

CyberGhost also has two paid add-on features. The first also lets you create a dedicated IP address, while the second is a password manager.

In addition, CyberGhost lets you connect to No-Spy Servers, which are designed to keep you 100% safe. Besides that, it has data compression for Android devices and a secret photo vault for iOS devices. The former makes the service’s app for the platform lighter, while the latter is a place where you can store all your private photos and videos.

Since it has more unique offerings, the winner of this round is CyberGhost.

Refer to the table to know what customer support options the two have:

As you can see, CyberGhost and PureVPN offer the same things when it comes to customer service. Nonetheless, the average response time of CyberGhost is worse than its rival’s. As such, it’s the loser of this category.

Check out the table to see how much each VPN charges:

As you can see, CyberGhost’s prices are better than PureVPN’s. However, they’re only slightly different. It should also be noted that PureVPN has a flat 31-day money-back guarantee policy for all its plans while its competitor doesn’t. With all that being said, the victor of this final round of our comparison is none other than CyberGhost.

Is PureVPN better than CyberGhost?

Yes. I’d have to say that PureVPN is better than CyberGhost. The reason why is because it’s got superior security and speed capabilities. Hence, the service will enable you to play games, watch movies, download files, and just about anything else in a safe and 100% seamless way.