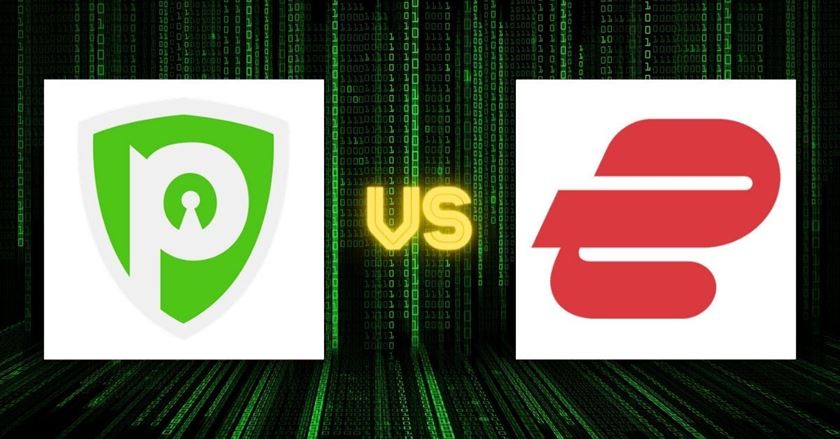 ExpressVPN and PureVPN are two of the best VPN services right now. They are highly-ranked and known for being capable of providing the best digital protection. Be that as it may, the wide consensus among online security experts is that ExpressVPN is much superior.

Here’s a table showing all the features each VPN has to offer:

While the two are alike in many respects, they’ve got many unique things going for them. It’s essential to take a closer look at them to know which one is best for you.

ExpressVPN is based in the British Virgin Islands. In comparison, PureVPN operates from Hong Kong. Both of these locations are VPN-friendly since they don’t fall under the jurisdictions of any of the world’s surveillance alliances such as the Five, Nine, or Fourteen Eyes Alliance.

However, only ExpressVPN makes use of SHA-512 hash authentication and an RSA-4096 key exchange. At present, what PureVPN uses as equivalents hasn’t been disclosed.

Like most top-tier services, ExpressVPN and PureVPN support OpenVPN (UDP & TCP) along with IPSec (LT2P and IKEv2). What sets the two apart is the former’s exclusive support for Lightway, which is proprietary, and the former’s for SSTP as well as PPTP.

Both VPNs claim to provide comprehensive protection from leaks. To know whether their claims are true, I conducted a few tests using IPLeak.net.

Here’s how ExpressVPN and its server in Singapore did:

And this is how PureVPN along with its Tokyo server fared:

Unsurprisingly, neither service failed to meet my expectations. The two completely masked my real IP address without hitches. Because of that, I can confidently recommend them to any individual that wishes to remain completely under the radar.

PureVPN has a firm no-logging policy that prevents it from storing private user information on its servers. The same can also be said for ExpressVPN, which even has itself regularly subjected to audits by independent third-parties.

One awesome thing about ExpressVPN is that its entire server network is RAM-based. That means it’s incapable of storing any bit of private data on all of its servers. Hence, it is beyond safe to use for regular and special consumers that need nothing but the best online security.

ExpressVPN and PureVPN will both keep you 100% safeguarded. However, the winner of this round of our match between the two is ExpressVPN. The reason why is because it has better encryption and a RAM-based network that makes it incapable of compromising your data.

Reports consistently state that PureVPN and ExpressVPN barely make an impact on internet connection speeds. This shouldn’t be surprising given that both have unlimited bandwidth, meaning they don’t limit how much data you can traffic through their servers.

To see which one was faster, I did a couple of speed tests. Below is a screenshot showing how ExpressVPN’s Singaporean server performed:

Now, this is how PureVPN and its Japanese server changed things:

As you can see, there’s a large difference between the two VPNs. That said, both didn’t slow my internet to the point wherein it was not usable. Needless to say, since it performed better than its competitor, the winner for this round of our ExpressVPN vs PureVPN battle is ExpressVPN.

ExpressVPN allows for torrenting on its network. It even has a P2P network that allows you to download safely on any server. On top of that, the service is widely compatible with almost mainstream torrenting clients such as BitTorrent, Deluge, qBittorrent, and uTorrent.

The developers of PureVPN haven’t established a 100% P2P network yet. However, they’ve set up many optimized servers. As a result, you may still use the VPN provider to securely download all torrent content that you want on your desktop or mobile device.

Below shows how ExpressVPN’s Hong Kong server did when I tested it for torrenting leaks:

In comparison, this is the result after I tested PureVPN’s server in Japan:

The results of both my tests were as expected. Both services don’t leak when they’re used for torrenting. Using either, you’re certain to have an easy and safe downloading experience.

Still, I’d have to say that ExpressVPN is better for this round of our PureVPN vs Expressvpn match. How come? Because its entire network is P2P enabled, meaning that you’ll get to download securely while being connected to any of its 3000+ servers.

All decent VPN providers must bypass the geoblocks major streaming services like Netflix, BBC iPlayer, Hulu, Disney Plus, and Amazon Prime Video. Luckily, many people have reported that ExpressVPN and PureVPN are more than capable of getting this task done.

No other streaming platform matches Netflix when it comes to popularity. Because of that, it was essential for me to see if each of the two VPNs could work alongside it. Here’s a screenshot showing how ExpressVPN’s server in the US did when I tried to watch Spotlight:

This is how PureVPN’s server in New York fared after I attempted to watch the same title:

Both VPNs were able to quickly grant me access to the title I wanted to watch. Also, they didn’t slow down my internet enough to cause buffering or issues with quality. Thus, I’m forced to end this round of our PureVPN vs ExpressVPN match with a tie.

ExpressVPN and PureVPN claim to be excellent VPN solutions for gamers. I had to know if this is true so I played a few matches on Call of Duty Mobile while being connected to each service.

All of my matches using both services went very smoothly. Not once did I experience any sort of lagging or drops in frames. In addition, getting into the game and finding opponents was a quick and easy process. To be honest, I even forgot that I was using a VPN service.

I’m again going to end this round of our ExpressVPN vs PureVPN battle with a tie. Why? The two services did as well as each other and gave me an identical experience.

VPN providers must be compatible with as many operating systems and browsers as possible. If not, they’ll not get to safeguard their users on all of their devices. Luckily, the developers of ExpressVPN and PureVPN fully understand this.

Refer to the table below to see what each service works on:

As seen above, both services function with a wide range of operating systems. Moreover, they also have extensions for Chrome and Firefox. In addition, it’s possible to use them with the Tor browser and install them on a wide range of compatible routers.

Since ExpressVPN has a Chromebook OS application and PureVPN doesn’t, it’s the obvious winner of this round of our match between the two.

All-encompassing compatibility is practically useless if a VPN provider doesn’t allow for many simultaneous connections. Furthermore, services that don’t let you use many devices at the same time with one subscription do not offer much value for money.

ExpressVPN allows for a maximum of 5 simultaneous connections under a single account while its rival allows for 10. Hence, it is the loser of this round of our ExpressVPN vs PureVPN match.

A VPN service that has a large network is superior to one that doesn’t. Why so? It’s less prone to becoming overloaded. Besides that, it also provides its subscribers with more connectivity options. Finally, it’s better at maintaining your anonymity and bypassing geo-restrictions.

PureVPN and ExpressVPN both have decently-sized networks. The former operates 6500+ servers around the globe whereas the latter operates 3000+. With that said, the win for this round clearly goes to PureVPN since it’s network is double the size of its competitor’s.

China’s draconian internet censorship measures are some of the most difficult in the world to bypass. Hundreds of VPNs attempt to do it yet only a handful achieve success. Also, even fewer can actually get the job done with the reliability any VPN subscriber would need.

Being the top-tier service that it is, ExpressVPN is known for being able to consistently bypass the Great Firewall of China with ease. All of our testers in the country have found success whenever they use it. In fact, some have never even experienced downtime.

PureVPN works just as well as ExpressVPN in China. Its large server network allows its users to access the version of the internet of almost any country or territory with ease. However, all our testers have reported they’ve experienced occasional periods of downtime.

ExpressVPN has simple apps on all platforms that deliver a superb user experience. Navigating them, selecting a server, and tweaking the settings are all incredibly easy. And yes, this remains completely true even for individuals who aren’t well-versed with technology.

At first glance, the applications of PureVPN seem great. They’re aesthetically-pleasing and look easy to work around. However, once used, you’ll quickly discover that they lack refinement and are somewhat clunky. Because of that, using them requires some patience.

Since it has better apps, the winner of this round is ExpressVPN. Don’t get me wrong though as the applications of PureVPN are by no means bad. I’m sure that with a couple of updates, the issues setting them back shall be addressed and they’ll finally reach their full potential.

PureVPN has a feature called Secure Wi-Fi, which makes sure you remain safe whenever you pair to public hotspots. Besides that, it also has three paid add-on offerings. Port forwarding along with DDoS protection adds another layer of protection to your VPN experience. Also, dedicated IP lets you establish a personal IP address to remain under the radar.

Sad to say, ExpressVPN doesn’t have any exclusive features. The reason why is because it chooses to focus on the key things it already has that make a VPN great.

Excellent customer support is something every VPN must have. Without it, subscribers won’t be able to properly get help to address any problems they might encounter. Moreover, they also won’t get to get any of their questions regarding the service they have answered.

Below is a table showing what the two offer in regards to customer support:

While both services have 24/7 live chat support, email support, ticked supper, and a wide online knowledgebase, only ExpressVPN has video tutorials. Furthermore, it has faster average response times than its competitor. Hence, it’s the winner of this round.

Pricing is arguably the most important thing to consider when choosing a VPN. Hence, a service that’s great but not priced competitively is not advisable to get. Fortunately, the prices of ExpressVPN and PureVPN are within the reach of average consumers,

Refer to the table below to know the pricing schemes of both services:

As you can see, the prices of PureVPN are superior to its competitor’s. Besides being cheaper, it also has a cheap trial period and a longer money-back guarantee policy. Due to that, it’s the winner in this round.

Is PureVPN better than ExpressVPN?

Nope. Despite everything going for it, PureVPN is inferior to ExpressVPN. It has worse security, applications, and compatibility. Moreover, the service is available on fewer platforms, meaning that it’s not capable of keeping users of certain platforms safe unless installed on a router.