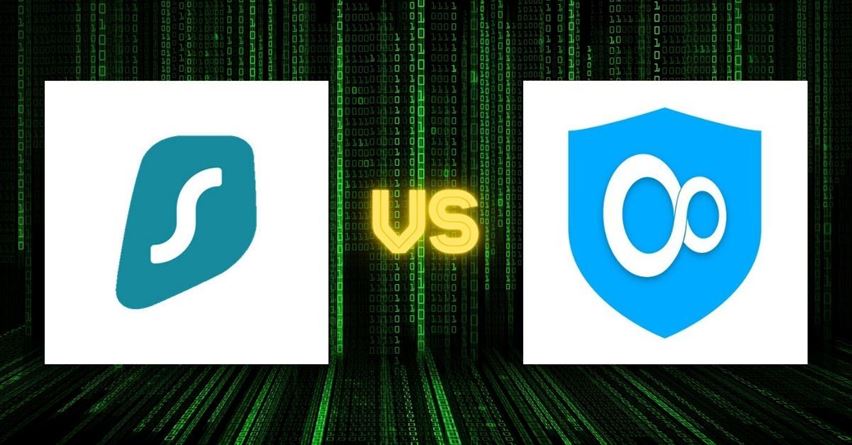 In recent years, Surfshark has been dominating the VPN industry. Despite being new, it has managed to surpass many top-tier competitors such as VPN Unlimited. To know the reason why, it’s necessary to further go into detail.

Below is a comparative table showing each of the two’s specifications:

Surfshark and VPN Unlimited are alike in many respects. However, lots of things set them apart too. To know exactly what you'll be getting with each service, we must thoroughly review them.

The two services are based in very different places.

VPN Unlimited operates from the US, where it’s constantly watched by the Five Eyes Alliance. In comparison, Surfshark is headquartered in the British Virgin Islands, where no copyright and privacy laws hinder it from going about freely.

Both VPN providers make use of AES-256 encryption and SHA-512 hash authentication. Aside from that, they also employ an RSA-4096 key exchange.

What’s unique about Surfshark is that it utilizes ChaCha as a backup to AES-256.

You can toggle OpenVPN, IPSec/IKEv2, and IPSec/L2TP when using either VPN. That said, the support for all these protocols is limited by platform on VPN Unlimited. As such, users of some devices might find themselves at a grave disadvantage.

VPN Unlimited maintains support for PPTP, WireGuard, and Keepsolid Wise. In comparison, its competitor lets you use Shadowsocks.

Here’s the result of a leak test showing how Surfshark and its Hong Kong server did:

This is how things fared after I moved to VPN Unlimited along with its server in Singapore:

Luckily, neither service failed to mask my Philippine IP address. As such, they’ve shown they can be trusted to keep subscribers anonymous during every browsing session.

Surfshark VPN is one of the few VPNs that has a 100% RAM-based network. Because of that, it’s not capable of storing your private data, meaning that its servers are beyond safe.

Unfortunately, the developers of VPN Unlimited have yet to utilize RAM-disk servers. On the bright side, a no-logs policy exists that prevents the service from collecting data.

Although both VPNs have excellent security, the win for this Surfshark vs VPN Unlimited round goes to Surfshark. How come? It can’t store logs and supports all major protocols on all the compatible devices.

The two VPNs have a reputation for being fast. Of course, this shouldn’t come as a surprise as both of them have unlimited bandwidth, meaning they don’t have a limit on how much data can be trafficked through their servers.

Here’s a screenshot of the result of a speed test I did after connecting to Surfshark’s SG server:

And here’s how it changed after I moved to VPN Unlimited and its same-location server:

I was quite astonished by the results as I didn’t expect VPN Unlimited to beat Surfshark. That said, it’s clear that the former service is this category’s winner.

I ran tests to see if either were safe for torrenting. Below is how Surfshark’s SG server fared:

And here’s is how VPN Unlimited’s corresponding server performed:

As seen above, none of the two failed to mask my IP address. Hence, it’s safe to say both are good for torrenting. Nonetheless, the winner of this round of VPN Unlimited vs Surfshark battle is VPN Unlimited since it is faster than its competitor.

Many say that Surfshark and VPN Unlimited are great for streaming. The two successfully work around nearly any geoblock. Without hitches, they provide access to the foreign libraries of streaming services like Netflix, Hulu, BBC iPlayer, and Amazon Prime Video.

I had to find out if both could meet my needs. As such, I tried to watch Spotlight on Netflix USA using the two. Here’s a screenshot of how Surfshark managed:

To compare, this is how VPN Unlimited performed:

As seen, both were able to work alongside Netflix. Furthermore, they did so flawlessly as I didn’t once experience buffering or changes in quality. Consequently, I’m forced to end this very important round with a tie.

I played a few matches on Call of Duty Mobile to see if VPN Unlimited and Surfshark VPN were good for gaming. As it turns out, both services are excellent solutions for gamers who want to remain safe during their play sessions. They don’t introduce lagging or cause FPS to drop.

Refer to the table below to know what each VPN service is compatible with:

VPN Unlimited has more browser extensions, but Surfshark maintains a Chromebook OS app and works alongside Tor. Because of that, there’s no winner again for this round of our VPN Unlimited vs Surfshark match.

Like most clients, VPN Unlimited allows for 5 simultaneous connections. In the industry, few competing services allow for more. A great example is Surfshark, which lets you connect an unlimited amount of devices simultaneously.

Surfshark has a large network consisting of 1700+ servers. Meanwhile, its rival only operates a little more than 500 servers across the globe. Hence, it’s not the best choice for connectivity.

Both VPNs work in China without hiccups. Reports are consistent in stating they can bypass the country’s Great Firewall effortlessly. Be that as it may, the winner of this round is Surfshark since it has more servers. As a result, it’s better at keeping its users hidden.

All of Surfshark’s applications are aesthetically-pleasing and user-friendly. Once they’re opened, you’ll immediately notice that everything you need can be accessed from the home screen. If anything, this makes using the VPN service extremely easy.

VPN Unlimited’s apps aren’t as well-made as Surfshark’s. Using them requires patience as they are clunky and unresponsive. Furthermore, they’ve got outdated interfaces that’ll make you think you’re using something developed in the 90s.

Both of Surfshark’s exclusive features aren’t free. The first one is called BlindSearch, which is a proprietary search engine. Meanwhile, the second is an alert system known as HackLock. It informs if your data has been involved in a security breach.

VPN Unlimited lets you create a virtual VPN server and personal IP address for free. It also gives you the option to utilize two-factor authentication when logging in to increase security.

Because all its extra features are free and more useful, the win for this category goes to VPN Unlimited.

Refer to the table below to know the customer service offerings of each VPN:

As seen above, the customer service of VPN Unlimited and Surfshark is almost identical. One key difference is that Surfshark has faster average response times. Amazingly, in less than 5 minutes, you can expect to get assistance from their representatives.

Below is a table showing the pricing schemes of the two:

VPN Unlimited has much cheaper prices than Surfshark VPN. Additionally, it offers a lifetime plan, which is perfect for those who don’t wish to continuously spend. For these reasons, the VPN provider is the winner of this last category of our Surfshark vs VPN Unlimited battle.

Is VPN Unlimited better than Surfshark?

No. Sad to say, VPN Unlimited isn’t better than Surfshark. VPN Unlimited lacks a RAM-based network and doesn’t allow for unlimited simultaneous device connections with one account. Also, the service provider has a tiny network. Moreover, its applications require much more improvement to match Surfshark’s.

I still wouldn’t rule out VPN Unlimited. Why? It’s a great option from a value standpoint. With it, you’ll be getting the most bang for your buck.