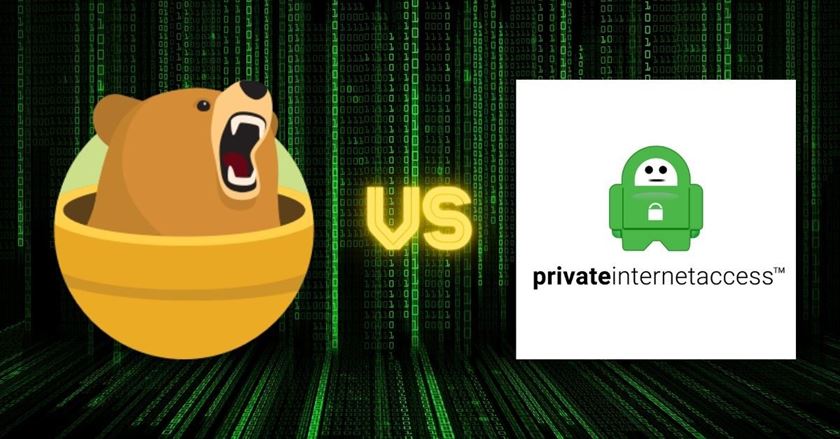 Private Internet Access and TunnelBear are two VPN services that are worth the try. In most of the categories listed below, PIA tops TunnelBear in most aspects—simultaneous connections, compatibility, and interface to name some of them.

If you’re still deciding which to install, here’s a rundown of each VPN’s features.

Now that we have an overview of these two VPN providers, let’s dig deeper into which is better for different categories.

If you are going to choose a VPN, better pick a service that is not under the jurisdiction of any Five Eyes Nations (namely Canada, USA, UK, Australia, and New Zealand). In this case, both TunnelBear and Private Internet Access are under the said jurisdictions.

Still, both of them have strict no-logs policies. They assure customers that they don’t keep tabs on user logs or user data.

TunnelBear and Private Internet Access use the same AES 256-bit encryption. This National Security Agency (NSA)-approved cryptogram assures you of security and protection.

PIA, however, ups its game a notch when it comes to encryption. This VPN provider uses SHA-256, which further secures your digital information. It also has an RSA-4096 handshake, which makes sure you are not connecting to an attacker’s server.

It’s important to choose a VPN service that will hide your IP addresses. Upon trying both of the VPNs in an IP Leak test, TunnelBear and PIA were able to mask my IP address.

This is how my actual address looked like before turning on the VPN services:

Selecting the Singapore server, this is how my IP address looked like when I used TunnelBear:

On the other hand, this is my IP address upon using PIA and selecting its Singapore server:

Both of them masked my IP address and I didn’t experience any DNS leaks.

Neither TunnelBear VPN nor Private Internet Access has a RAM-disk server, a server that will not keep data when you turn off your device. However, in 2020, PIA informed its users that they will be able to use its Next Generation Network as it comes out of beta. This upgrade includes RAM disks.

Let’s see which one is faster between the two VPN services. I did a test to see TunnelBear and Private Internet Access’s server speeds.

Here was my speed before turning on any of the VPNs:

I selected TunnelBear’s Singapore and US servers and here’s what the speed test displayed:

And here’s my speed when I selected PIA’s Singapore and US-Chicago servers:

In terms of connection speeds, I’ll say it’s a tie.

Both Private Internet Access and TunnelBear allow torrenting and P2P. TunnelBear enables file-sharing in its networks but suggests you choose Canada, Germany, Netherlands, Romania, Sweden, US, and the UK as your preferred tunnels. It’s also best if you use a desktop application instead of browser extensions.

Likewise, Private Internet Access allows P2P file-sharing in all of its networks.

I’ve determined my network identity before turning on a VPN and this is the result:

This is how my IP and torrent address looked after selecting TunnelBear’s US server:

And this is what it looked like upon selecting PIA’s US-Chicago server:

Both of them hid my network identity. There’s not much difference in speed either. So I’ll call this round a tie.

Now I’ve tested both of their US servers to watch Spotlight on Netflix. I was expecting that PIA would give me a better Netflix streaming experience because it appeared fast when I conducted the speed test. On the contrary, TunnelBear gave better results. This can be the result of TunnelBear’s better ping stats.

Here’s what Spotlight looked like while I was using TunnelBear:

Here is what the movie looked like while I was using PIA:

Private Internet Access gave low resolution and I’ve experienced lags upon loading the movie. That said, this VPN is not a good recommendation for streaming content. TunnelBear is a better choice when streaming, especially on Netflix.

TunnelBear is well-suited with Windows, macOS, Linux (limited), Android, iOS, and browsers like Chrome, Firefox, and Opera. Private Internet Access works on Windows, Android, iOS, and gaming systems like Xbox One, PS4, and Nintendo Switch (all via router VPN connection). When I used them for playing Mobile Legends, I experienced minor lags, especially with TunnelBear.

And this is what it looked like while using PIA:

There are better VPNs for gaming, but if I have to choose between the two of them, I have to pick Private Internet Access.

TunnelBear is compatible with Windows, macOS, Android, iOS, Linux (limited), and browsers like Google Chrome, Firefox, and Opera. PIA, meanwhile, is compatible with the same platforms, but it has an advantage since it can be installed on selected routers, straight from the source.

In terms of compatibility, I’ll go with a VPN service that can be installed on my router. This round goes to Private Internet Access.

If you are the type of person who wants to use several gadgets simultaneously, it’s smart to choose a VPN that can be installed on your router. In this way, you’ll only install the VPN once and not on every device. Plus, you will be able to secure every gadget that’s connected to your network.

TunnelBear allows you to use up to six connections, including laptops, mobile devices, and desktops, at the same time. Unfortunately, you cannot install it on your router, unlike PIA. This VPN service allows up to 10 simultaneous connections and you can install it on selected routers. In other words, you can use it on more devices.

For simultaneous connections, I have to choose Private Internet Access.

In 2020, both of these VPN providers shut down their Hong Kong servers as the Chinese government passed a security law that may become a threat to digital information safety. But Private Internet Access also restored it through a new Hong Kong exit gateway. Currently, you can access PIA’s Hong Kong server.

Only a couple of VPN services claim they can bypass the Great Firewall of China. For TunnelBear, the VPN service says you can use it in China and there are active users in that area. However, it doesn’t guarantee that the connection will work every time because countries are more strict than others.

PIA doesn’t claim that it can bypass China’s firewall. You can’t expect it to work in every area in that country.

I’m not convinced with how either of these VPN services will work in China. For this category, I’ll say it’s a tie.

When you install TunnelBear on your laptop, it will appear as a compressed interface with a world map. From there, you’ll see tunnels per region where the bear can travel. It has a cute concept. However, I am not a fan of its interface. I cannot expand its window, making it hard to navigate. It does have a country server list and I prefer to use it instead of the map.

I find PIA’s interface more helpful. Although its window is small, I find it easy to use and it displays other information like usage and subscription. It has a quick connect feature and a separate list of the country servers you can access.

TunnelBear offers Ghostbear. This feature is equal to obfuscated servers, a feature that masks your VPN connection traffic as regular Internet activity in a restricted environment. But if you don’t need to use it, might as well turn it off for it will affect the speed of your connection.

They both have distinct additional features. But in the comparison of PIA vs TunnelBear, I’ll give my vote to Tunnelbear.

TunnelBear does not offer live chat support for its users. It has an email-based contact form. But I can commend how fast they send an email after they receive a ticket where they offer helpful content that may help my concern. If that doesn’t satisfy you, they’ll respond within hours. In my experience, they replied within two hours.

Unlike TunnelBear, PIA has live chat support. This is a big plus for me as the VPN provider can respond to your concerns more concisely. They also have a faster response time.

Here’s a table for a more comprehensible comparison:

I’m more into VPN providers with live chat support, so I’ll bet on Private Internet Access for this category.

Here are the prices TunnelBear vs Private Internet Access:

If you want to try out a VPN service before subscribing, TunnelBear gives you free 500MB per month. But if you decide on a paid service, PIA offers more inexpensive deals. I’ll prefer Private Internet Access in this area, considering its service and features.

Private Internet Access is a better choice than TunnelBear. It has a better interface, value for money, servers, compatibility—possibly in almost all of the areas. But if you’re looking for a VPN that will let you stream HD video, TunnelBear is a better option. TunnelBear will also give you a free plan if you’re just beginning to try out VPN services.