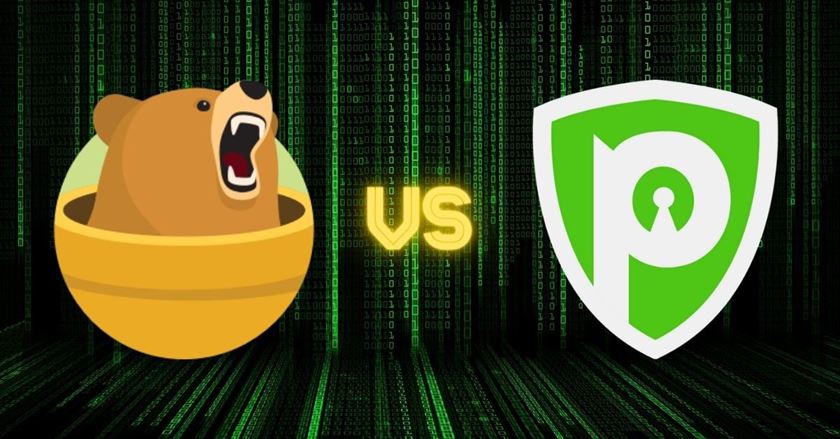 TunnelBear is a VPN service that offers a free tier to its users, but this was not enough to topple PureVPN. Out of all the categories we tested on, PureVPN remains a better choice in terms of speed, security, and compatibility.

Let’s break down the details on PureVPN and TunnelBear:

Now that we got an overview of PureVPN and TunnelBear, let’s see how each of the VPN providers did in each area.

In 2020, PureVPN closed down all of its Hong Kong servers as China implemented the National Security Law. Such law poses a threat to online freedom and security. The VPN services re-evaluated its jurisdiction to further protect its customers.

There’s no difference between PureVPN vs TunnelBear when it comes to encryptions. Both of them use AES-256-bit, which is strong encryption that even a supercomputer will find difficult to decrypt.

Both PureVPN and TunnelBear have OpenVPN and IPSec/IKEv2 as their VPN protocols. But only PureVPN uses PPTP and SSTP for added security.

A good VPN provider will not let your true IP address leak. So to verify that PureVPN and TunnelBear can protect their users from leaks, I’ve tested both of them.

For PureVPN, here was my result when I connected to its Singapore server:

And this one is from TunnelBear’s corresponding server:

Neither one of them has any IP leaks.

A RAM or diskless server will provide you with more security since it erases all your information once you disconnect your device. Unfortunately, PureVPN and TunnelBear do not offer this kind of feature. Both of them, however, swear by their zero logs policy. But it would be nice to have them upgrade their systems.

PureVPN does not have much difference from TunnelBear, apart from the fact that TunnelBear is under Canada, which is part of an intelligence-sharing agreement. Both of them protect their users from leaks, but PureVPN has more VPN protocols than TunnelBear. In that case, PureVPN wins this round.

I want to make sure my VPN provider can meet my expectations when it comes to speed. It makes work more reliable and efficient. I tried to see which one of them is faster.

I took note of my base speed first. This was my result:

I tried two of PureVPN’s servers, US and Singapore, to see the difference. These became my outcome:

I also tested out TunnelBear and these became my results:

PureVPN and TunnelBear’s download speeds were almost the same when I tested them. When I tired their respective servers, there was a noticeable difference in results. PureVPN is faster and has better ping stats than TunnelBear.

For the speed category, I declare PureVPN as the winner.

TunnelBear and PureVPN both allow torrenting and file sharing. PureVPN boasts of its optimized servers for P2P. TunnelBear also says you can do torrenting on every single one of its servers.

Still, should you encounter any issue while downloading, TunnelBear has recommended ones (US, UK, Canada, Netherlands, Germany, Sweden, Romania) so you can have a smooth torrenting experience.

To prove that both PureVPN and TunnelBear do not permit leaks when torrenting, I conducted a test. This was my torrent address before using PureVPN or TunnelBear:

When I used PureVPN’s Singapore server, this is what I got:

On TunnelBear’s counterpart, this was what I gathered:

While both PureVPN and TunnelBear prevented any leaks, PureVPN takes the lead here since it has optimized P2P services. PureVPN wins in terms of torrenting and P2P file sharing.

PureVPN and TunnelBear both can access the geo-blocked content of well-known streaming platforms like Amazon Prime Video, Netflix, and the like. But between these two, only PureVPN can be installed on routers, making it more compatible with devices like Roku and Apple TV. It is also supported for Android TV and Firestick.

As a person who spends time on Netflix on idle days, I would love a VPN service that will give me an amazing HD video streaming experience. I tried PureVPN and TunnelBear’s respective US servers to watch Spotlight on Netflix, and these were my outcomes:

Both gave me satisfying results while watching. The video quality was not pixelated, and there were no lags or data buffers. If Netflix was the only streaming platform I’m considering, I’ll say this round is a tie.

But since we’re looking at the overall functionality, PureVPN is the obvious winner because it is compatible with more options than TunnelBear.

PureVPN and TunnelBear support different browsers and operating systems, but only PureVPN can be used on gaming consoles like Xbox One, Nintendo Switch, and PS4. This is the advantage when you can install a VPN on a router. You can connect gaming systems via a router.

PureVPN also has a Port-Forwarding add-on, which reinforces your connection on a game’s server.

With this, PureVPN is the obvious leader for gaming.

It’s no question that TunnelBear and PureVPN are supported for the common browsers and certain operating systems. But since TunnelBear can’t be installed on routers, it is at a disadvantage.

Take a look at the chart of compatibility of TunnelBear and PureVPN:

Having your VPN installed on your router is already a plus. So for compatibility, PureVPN wins once again.

We want to get the best value for the price we pay, and that means every VPN user, including myself, looks for a VPN service that will offer extra simultaneous connections. TunnelBear allows five devices at a time.

PureVPN allows more devices than TunnelBear because you can have 10 slots at a time per subscription.

Numbers matter, so for this round, PureVPN wins.

PureVPN has more than 6500 servers in more than 180 locations worldwide. That’s more than double of what TunnelBear has to offer. The latter has 3000 servers in 41 countries. More servers mean more options so you can find what suits your needs. It will also help hide your IP address better.

It will take a good VPN service to evade China’s highly censored online environment. PureVPN does not claim to work in China if you’re going to use the app. But it recommends trying manual configuration on limited servers. Still, they don’t guarantee the quality and reliability of the connection.

TunnelBear, on the other hand, lets you “tunnel” wherever you are on the globe. You can use its obfuscated server called GhostBear to try to avoid China’s firewall. However, you can’t expect a stable connection at all times, but you can give it a shot. Make sure that you’ve downloaded the app before traveling to the country.

Based on this information, TunnelBear has a greater chance of bypassing the firewall of China. TunnelBear wins this round.

PureVPN has a simple interface that features different segments like your dashboard, locations, notifications, and support. When you click locations, it will display the countries and the servers under it. There are also “notification” and “setup on devices” segments. Just in case you want to refer the service to a friend, you can easily do so on its interface.

This is how the app looks like on macOS:

TunnelBear has a small interface on macOS. It has a bear that travels from one tunnel to the other, in which the tunnels represent the countries. On mobile, TunnelBear’s interface looks okay, but when you’re using a laptop or desktop, it’s better if it has an expandable window instead of a small one for better navigation.

In general, I like PureVPN’s interface more. I find it easier to navigate than TunnelBear’s. PureVPN wins this round.

PureVPN has Secure Wi-Fi and add-on features like a Dedicated IP, Port Forwarding for games, and DDoS protection. For TunnelBear, it has GhostBear, which is an obfuscated server that helps disguise your VPN activity as regular online traffic.

In terms of additional features, PureVPN has more offers than TunnelBear. It takes over TunnelBear in this round, too.

I can chat with the customer support of PureVPN, which I appreciate. It also takes less than five minutes before someone can attend to my needs. TunnelBear, on the other hand, does not have a live chat feature, but it still responds fast via email and ticket support.

To understand each one’s customer support offers, refer to this table:

Comparing TunnelBear vs PureVPN, the latter has a faster response time and has a live chat feature. TunnelBear does not lag far behind in terms of response time, but it loses this round because you cannot chat directly to a customer support representative.

I’ll give this round to PureVPN as well.

Take a look at the pricing and discounts of PureVPN vs TunnelBear:

Although TunnelBear offers a free but limited subscription, PureVPN appears to be more affordable. If you compare their lowest and one-year prices, PureVPN has a lower rate. With that, my vote still goes to PureVPN.

Is PureVPN a better choice than TunnelBear?

Yes. From what we’ve discussed per category, PureVPN tops TunnelBear in almost all the areas. It is faster, offers more compatibility when it comes to gaming and streaming, has optimized servers for file sharing, and has more VPN protocols.

But if you want to try out TunnelBear, it is not a bad choice. You can even try it for free. In case you are not satisfied with its performance, you don’t have money to lose.