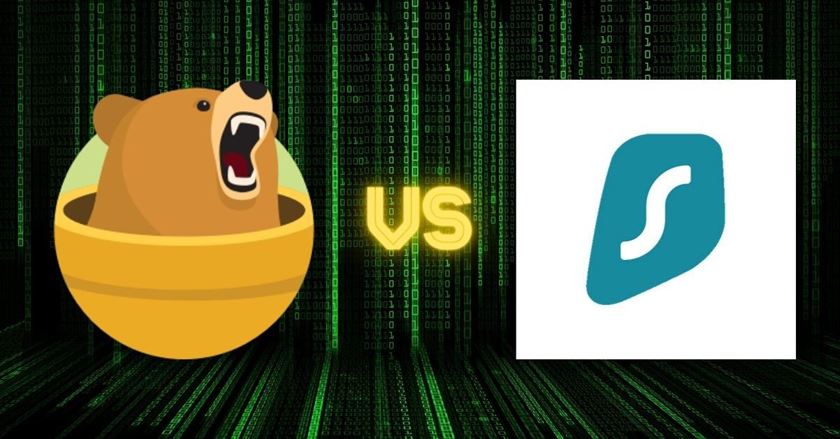 Surfshark is one of the best VPN providers out there. TunnelBear may have strong points of its own, but none of it can surpass the features Surfshark offered.

To make it clearer, here is the breakdown of the features of both VPN services:

Now it’s time for an in-depth review of TunnelBear and Surfshark.

Based on the VPN services’ headquarters, Surfshark is on the lead. TunnelBear operates in Canada, a Five Eyes country. Surfshark has its headquarters in The British Virgin Islands, a country where there are no mandatory data policies. If you were to choose a VPN provider, it’s smarter to subscribe to one outside of the jurisdiction of Five Eyes countries.

TunnelBear uses AES 256-bit encryption while Surfshark boasts of using AES-256 SHA-256 Hash Authentication, 4096-bit RSA Key Exchange, and ChaCha. From the kinds of Encryption Surfshark uses, you can see it provides more security to its users than its competitor.

Both VPN providers use OpenVPN and IPSec/IKEv2 for their protocols. While this may provide enough security for the VPN users, Surfshark did not stop there. It provides more protection to its customers by using Shadowsocks, an encryption protocol that helps bypass online censorship.

If your VPN does not protect you from IP leaks, then it fails to do its job. To see if either TunnelBear or Surfshark provides me the protection that I need, I ran an IP Leak test.

Before running the test, I recorded what was my original IP address.

When I tested out TunnelBear’s Singapore server, this is what I got:

Surfshark’s Singapore server did not disappoint as it also replaced my address:

I did not experience any IP or DNS leaks from either of the VPN providers.

Between TunnelBear and Surfshark, only the latter has 100% RAM-only servers. In 2020, Surfshark upgraded its servers to make its users more secure and protected. This means that whenever you turn off a server, it automatically erases all information on the drive.

TunnelBear does not offer this kind of security yet. It does have a no-log policy, but a VPN service with a diskless server is a better option.

Out of all the subcategories of privacy and security, Surfshark is the better choice. It has more encryption features, VPN protocols, and RAM-disk servers. Surfshark surpasses TunnelBear in this area.

Surfshark has already been making a buzz for its speed and reliability. TunnelBear isn’t so far behind, considering that it also has a free tier for its subscribers. To confirm, I’ve decided to run a speed test before and after I use any VPN service.

Here was the basis of my Internet speed:

When I used TunnelBear’s US and Singapore servers, these were my results:

Both gave me good speed results, but TunnelBear was noticeably slow when I connected to its US server. Surfshark, on the other hand, was pretty consistent regardless of the distance of my chosen server.

In terms of speed, Surfshark still wins over TunnelBear.

TunnelBear and Surfshark allow P2P file sharing. You can do torrenting on all of Surfshark’s servers. TunnelBear also enables P2P sharing, but just in case you face some difficulties, it suggests that you connect to its European servers namely Netherlands, UK Romania, Sweden, and Germany, or the US and Canada.

I’ve tested if both can hide my IP address while torrenting. Here was my result before I used TunnelBear or Surfshark:

When I ran the leak test to TunnelBear, it showed me these results:

This one’s the result I got from Surfshark.

They did their jobs as VPN providers to hide my torrent address. But only Surfshark has claimed it can do P2P sharing on all of its platforms. So for this category, Surfshark wins.

Surfshark and TunnelBear work on Kodi, Hulu, Netflix, Amazon Prime Video, and HBO Max. Still, Surfshark ups its game a notch because you can also install it on Firestick, Kodi, Android TV, Roku via a router, and AppleTV via SmartDNS.

To test out TunnelBear and Surfshark’s consistency and reliability when it comes to streaming, I’ve connected to their respective US servers separately. I tested them while watching Spotlight on Netflix.

Check out what kind of streaming experience TunnelBear gave me:

Meanwhile, this is how Surfshark did in terms of Netflix streaming:

While both of them performed well in terms of HD video streaming, Surfshark is still compatible with more streaming devices and platforms combined. It wins this round.

TunnelBear claims to work in different operating systems like Windows, macOS, iOs, Linux (limited), and Android. It also has extensions for different browsers. Surfshark offers the same features. The only difference is that Surfshark works on gaming consoles via DNS or router.

Surfshark also promises that it can access games without limitation and play privately without compromising your Internet speed. It wins the gaming category over TunnelBear.

Apart from being compatible with most OS and browsers, Surfshark is also supported for selected routers. This is a feature TunnelBear does not have.

I’ve summed up all the devices and browsers each of the VPN providers are compatible with:

Judging from this table, it’s clear that Surfshark tops TunnelBear once again.

If you’re the type who wants to secure all of your devices at the same time, you should pick a VPN service that allows more simultaneous connections. TunnelBear allows you to connect up to five devices, which can be a combination of a laptop, mobile phone, and browsers.

With Surfshark, on the other hand, you don’t have to worry about the number of devices. Once you’ve subscribed to this VPN service, you can have unlimited simultaneous connections. For this round, it’s obvious where the vote should be. It belongs to Surfshark.

The last time we checked, TunnelBear had over 3,000 servers. This changes from time to time, especially if there are larger volumes of users around the globe. They have over 40 server locations around the world.

Meanwhile, Surfshark has about 3,200 servers in 65 countries. It provides more options that may suit a user’s needs. With these numbers, I can conclude Surfshark has better standing in terms of servers.

Do Surfshark and TunnelBear work in a highly restrictive country like China? Surfshark definitely works. Out of all the VPN services, it is one of those that can circumvent China’s firewall with ease.

TunnelBear also claims to work in China, but advises to download the app before traveling to the country. With its obfuscated server, you can “tunnel” anywhere in the world. Still, it can’t guarantee fast and stable connections at all times.

Since Surfshark is faster and more reliable than TunnelBear in bypassing the restrictive online environment of China, it has my vote on this.

Surfshark has a minimalist display, but it provides you what you need the most. It shows all the available locations, including suggested multi-hops to add extra protection. Its interface is functional and easy to use in general.

TunnelBear has a bear-themed interface, adhering to its name. It displays a world map with a bear that travels to different tunnels, which represents the countries. I find the interface cute and entertaining, but it will help even more if the window expands and I’ll be able to see the whole map all at once.

It will also be nice if TunnelBear will give its users an option to select location servers per country.

For interface and usability, I find Surfshark more helpful and convenient for me. Once again, Surfshark beats TunnelBear.

TunnelBear has Ghostbear, a feature that acts as an obfuscated server. This makes your VPN activity seem like a normal Internet activity. It gives you extra protection from prying eyes.

Surfshark, on the other hand, has add-on features like HackLock and BlindSearch. And as mentioned earlier, it also has a MultiHop feature that gives another layer of security as it “chains” two VPNs or more together.

SurfShark wins this category as it offers more add-ons than TunnelBear.

Unlike most VPN services, TunnelBear does not have a live chat support feature. It does, however, have a fast response time. It gives you answers from their existing articles that may help you initially instead of waiting for a “support bear” to respond to your queries.

SurfShark does have live chat support and also has a fast response time.

To make it easier to understand, here’s the list of the customer support features of TunnelBear vs Surfshark:

Both took less than an hour to respond, but Surfshark is undeniably faster than TunnelBear. It’s also a plus that out of the two, only Surfshark has live chat support. With that, I’ll say this round goes to Surfshark again.

Check out the pricing for Surfshark vs TunnelBear:

If you look at the lowest price per VPN provider, Surfshark offers bigger discounts than TunnelBear. Considering all the great features Surfshark has to offer, this price is already a steal.

TunnelBear may have a free tier, but I’ll go with a VPN service that offers more, even if that means spending a little more. I’ll go with Surfshark for this one.

Which one is better: TunnelBear or Surfshark?

I can say, without a doubt, that Surfshark is the better choice. Running down through our categories, it wins every single one. It is fast, reliable, has RAM servers, and is secure enough that you can go around China’s firewall. Surfshark is undeniably one of the best VPN services out there.

But you can’t also disregard TunnelBear. It gives a decent service to its free tier subscribers. IF you’re just trying out VPNs for the first time, TunnelBear is not a bad choice.