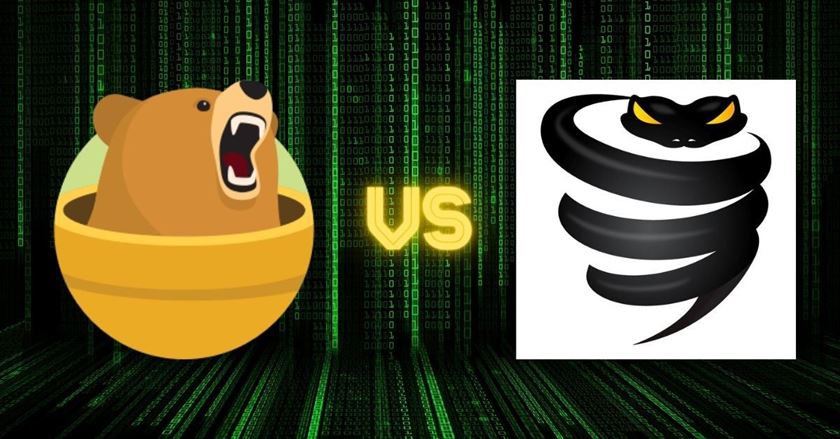 VyprVPN is a great choice for a VPN—it is reliable yet inexpensive. Even though TunnelBear has a free subscription, VyprVPN still proves it is a better pick. It has strong encryption and VPN protocols, can provide you with a fast connection, and is outside of a Five Eyes country.

Here is an overview of TunnelBear vs VyprVPN’s features and offers:

Now that we have our breakdown, it’s time to see which of these two VPN services wins per category:

TunnelBear is based in Canada – a country that's a member of the Five Eyes, an intelligence-sharing agreement between the US, New Zealand, Australia, the UK, and Canada. VyprVPN is located in Switzerland, a country outside of the Five, Nine, and Fourteen Eyes. Both of these VPN providers assure VPN users that they still follow a strict no-log policy.

Both of these VPN services offer a kill switch and ad and malware blockers.

Both VyprVPN and TunnelBear use AES-256 for their encryption, but only the former has SHA-256 Hash Authentication, which is more secure than other usual hash authentication.

The two VPN providers have VPN protocols like OpenVPN and IPSec/IKEv2. VyprVPN, however, takes the lead in this area because it uses WireGuard. It also uses Chameleon, a protocol that can enable VPNs to bypass highly restrictive environments put up by governments and companies without slowing down your connection.

I have to make sure either of these two VPN services protects me from any leaks. I’ve tried to put each of them through an IP leak test.

Here was my IP address without using a VPN:

This was the IP address displayed when I tried TunnelBear:

After that, I tried VyperVPN’s Singapore server as well:

They did not leak my real IP address, which goes to say they protect my network identity.

For those who would want to try out VPNs, a service with a RAM server is a better choice. This type of server offers more security than those who don’t as it does not store any of your data once you disconnect.

Sadly, neither of them offers this kind of server.

Based on these areas, VyprVPN is a better choice than TunnelBear for security and privacy. It has additional encryption and protocols that provide another layer of security than its rival VPN provider. It’s also a plus that it is based in a jurisdiction outside of the Five Eyes.

VyprVPN has been boasting of its speed, no matter what device or activity you use it in. TunnelBear is also decent when it comes to speed. To prove their claims, I conducted a speed test.

Here is my original speed without using any VPNs:

Here is what VyprVPN did when I connected to some of its servers:

Meanwhile, here are the results TunnelBear gave me:

Although their performances were not far from each other, VyprVPN has a bit of an edge since it has better ping and download speed. The winner of this round is VyprVPN.

Both VyperVPN and TunnelBear enable file sharing. The former has optimized servers for P2P, while the other also allows torrenting on its servers. Still, they (TunnelBear) suggest preferred server locations like Romania, Germany, Sweden, Netherlands, US, Canada, and the UK.

TunnelBear also reminds that you should do torrenting while using the desktop application and not the browser extension to ensure protection for your entire device.

I’ve tested out both parties for any leaks. To start, here were my IP and torrent addresses:

These were my results for VyprVPN vs TunnelBear:

They both hid my IP and torrent addresses, but of course, VyprVPN has the lead because it has optimized servers for torrenting.

Since I like to watch movies and series on Netflix in my spare time, I prefer a VPN service that is fast enough to give me a quality streaming experience. I’ve tried watching Spotlight while using VyprVPN and TunnelBear’s respective US servers and compared my experience.

This was TunnelBear’s performance:

This one is VyprVPN’s performance:

They both gave me an HD quality video and there were no lags while I was watching. If you just want to unlock foreign libraries of Netflix, either VyprVPN or TunnelBear will do the trick. But based on the number of compatible streaming devices, VyprVPN is a better choice over TunnelBear. So for this round, VyprVPN wins.

VyprVPN and TunnelBear have a lot in common in terms of operating systems and browsers for gaming. The difference is you can connect your consoles like Xbox One, Nintendo Switch, and PS4 via a DNS or Router. VyprVPN also claims to be the “fastest gaming VPN.”

With the speed offers and gaming compatibility that VyprVPN has, I can easily conclude that it is the better choice over TunnelBear.

Both VyprVPN and TunnelBear are compatible with Windows, iOS, Android, and macOS. TunnelBear has browser extensions while VyprVPN does not. However, they are aiming to release a beta version so they can provide this feature.

While VyprVPN lacks browser extensions, it is compatible with selected routers, a feature that TunnelBear is yet to offer.

Here’s a breakdown of TunnelBear and VyprVPN’s compatibility:

Since they have different edges over the other, I’ll call this round a tie.

If you want to use different devices simultaneously, it’s better to use a VPN provider that enables you to do so. For VyperVPN and TunnelBear, there are not many simultaneous connections that you can do because both of them only allow five connections at a time.

I’ll say this round is a tie.

TunnelBear has about 3000 servers in 41 countries. But according to this service, it adds and eliminates servers, depending on the volume of its users. Meanwhile, VyprVPN has over 700 VPN servers in more than 70 locations.

China is one of the countries with highly censored Internet access. Only a few VPN providers can go around the firewall. TunnelBear mentions that it works the country, but it suggests that you install the app on your device before heading to China. Turning on GhostBear will help you hide your VPN activity. Still, it cannot guarantee reliability at all times.

These locations can give you a better experience.

Since VyprVPN gave a more concrete answer when it comes to bypassing China’s firewall, I’ll go with this VPN provider.

VyprVPN has a small and simple display yet, it gives you your needed information, especially its servers. It shows the latency per server—the lower the latency, the better connection you will have. It’s a way of suggesting what server you should choose depending on your location.

This is what the VyprVPN interface looks like on macOS:

For TunnelBear, it complies with its bear theme. It has a bear that tunnels from country to country on the map. It has a small interface, like VyprVPN, but I find it more difficult to navigate. It does not expand so I am unable to view the whole map.

I find VyprVPN’s interface more functional, so this round goes to it.

TunnelBear has an obfuscated server called GhostBear. It makes your VPN traffic look like a usual online activity.

Meanwhile, VyprVPN has VyprVPN Cloud, which is a server deployment solution that makes a user secure when you enter a cloud server. You can use it on VirtualBox, DigitalOcean, and Amazon Web Services (AWS). It also has VyprVPN, which adds protection from DNS leaks.

For the add-on features, I’ll go with VyprVPN.

I find the live chat support feature helpful more than anything since it makes me converse my concern more accurately. Unfortunately, TunnelBear does not offer this kind of support. Both of them have ticket support, support email, and an online knowledge base.

For a complete detail of customer support, I’ve provided a table:

VyprVPN is accommodating and responds fast via live chat. TunnelBear, on the other hand, takes a little longer because you can only contact it via support email. It does, however, send a ticket and list of articles that may answer your question without waiting for a “support bear.”

Because it has live chat support and responds in a jiffy, I’ll go with VyprVPN for this category.

Check out the prices VyprVPN vs TunnelBear:

TunnelBear has a free subscription, but it’s obvious that VyprVPN has better deals when you opt for a paid subscription. Comparing the lowest price per month, VyprVPN tops TunnelBear.

For a better value for money, I choose VyprVPN.

Is TunnelBear better than VyprVPN?

Unfortunately, no. Between these two VPN providers, VyprVPN is the overall winner. It is cheaper, yet it is faster, provides more protection and security, and can bypass the Great Wall of China. It also boasts of its fast connection when it comes to gaming. The only catch is that it has few servers and it does not offer browser extensions.