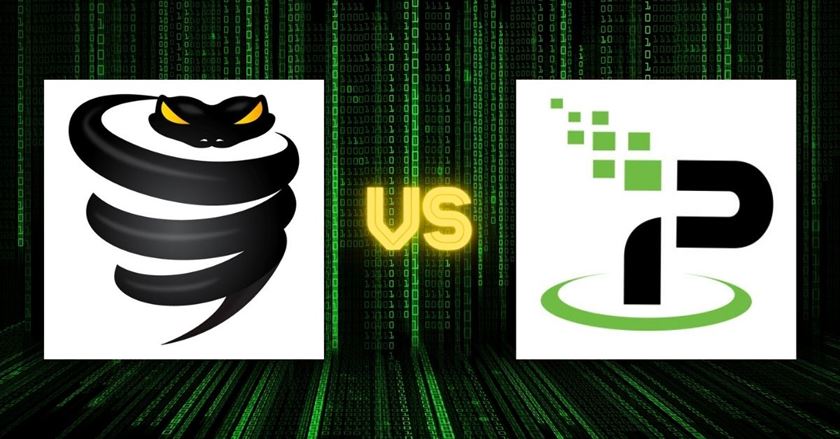 IPVanish is an established VPN that’s been ranked as one of the best for quite some time. Sad to say, it has recently been surpassed by VyprVPN, which is a newcomer in the industry.

Let’s compare them side by side:

VyprVPN is based in Switzerland, where it’s not governed by restrictive privacy and copyright laws. In comparison, IPVanish operates from the United States. That means it falls under the jurisdiction of the Five Eyes Alliance.

You can say that IPVanish is at a massive disadvantage. After all, it must follow laws that hinder its operations. When ordered by the authorities to disclose private user data, the VPN must comply or else face being shut down.

Like all top-tier services, VyprVPN and IPVanish utilize AES 256-bit encryption. However, only the former has disclosed that it uses SHA-512 hash authentication. The handshake that each client employs has yet to be divulged.

Both VPNs support OpenVPN (UDP & TCP), IPSec (IKEv2 & LT2P), and PPTP. However, the only service that allows users to utilize SSTP is IPvanish. Meanwhile, VyprVPN lets its subscribers employ WireGuard along with the Chameleon protocol, which is proprietary.

On their websites, the two VPNs claim to provide 100% leak protection. To see for myself, I tested each one out using IPLeak.net. Here are my results with both VPNs turned off:

And this is the result following my move to VyprVPN’s Singapore server:

The results didn’t surprise me. Neither VPN failed to hide my legitimate IP address. I can say they’re capable of masking my identity when I browse the internet.

Unfortunately, none of the two have upgraded to a RAM-based network. Thus, both are capable of storing your information if they wanted to. If anything, the best that each has to offer is a zero-logging policy.

VyprVPN has no record of breaching its policy. Sadly, the same cannot be said for IPVanish. It once gave up private information to aid in a criminal investigation in 2016. For that reason, lots of experts deem it to be untrustworthy.

The winner in this round of our VyprVPN vs IPVanish match is clearly VyprVPN. Why? The VPN has a flawless reputation when it comes to keeping zero logs. On top of that, it supports more protocols. Finally, it’s not based in a Five, Nine, or Fourteen Eyes Alliance country.

To know how VyprVPN and IPVanish affect internet speeds, I ran some tests. Before seeing the results, check out my speed without using any VPN:

Here’s how IPVanish’s server in Tokyo changed it:

Now, this is how VyprVPN’s Singapore server performed:

The speed capabilities of the two services are as different as night and day. While both slowed down my connection, only IPVanish put it in an unusable state. Due to that, VyprVPN again takes the win in this round of our match.

At first glance, IPVanish seems to have an advantage in this category since its entire network is fully P2P enabled. Though VyprVPN falls short in this regard, it automatically detects any torrenting activity and then connects you with a suitable server.

To make sure both services could hide my connection during torrenting sessions, I conducted some tests. Below is a screenshot of the results with no VPN in use:

This is how IPVanish, along with its Tokyo server, did:

VyprVPN wasn’t able to fully safeguard my IP address during the test. As such, the winner in this category of our IPVanish vs VyprVPN battle is IPVanish by default. It has a fully optimized P2P network and is capable of providing comprehensive leak protection.

Reddit posts say that IPVanish is no good for streaming. It can only bypass a handful of foreign streaming service libraries. Moreover, the VPN often brings upon issues with buffering and quality due to its mediocre speed capabilities.

By contrast, many claim that VyprVPN is an excellent service for entertainment purposes. With it, there will be no problem gaining access to content on Netflix, Hulu, BBC iPlayer, and other well-known streaming websites. Besides that, it also seldomly causes lagging and quality problems thanks to its minimal effect on internet connections.

Netflix is hands down the world’s most popular streaming platform. Therefore, it was only right for me to utilize it to test each VPN’s streaming capabilities. Below is a screenshot of my attempt to watch Spotlight on IPVanish’s US server:

Next was VyprVPN’s New York server:

To my surprise, IPVanish made me access Netflix USA’s library. Still, it caused me to have a negative viewing experience since its sluggishness caused lag and quality issues. As a result, the winner of this category is VyprVPN, which performed flawlessly without hiccups.

I’m an avid Call of Duty Mobile player that needs a VPN to protect me during every match. To see whether IPVanish and VyprVPN are good enough, I used each during several play sessions.

IPVanish left me very frustrated. It took away my competitive edge by introducing much lag and frame drops. The service also made it hard for me to jump into matches. Doing so took a really long time and wore out my patience.

The performance of VyprVPN was very different from its competitor. It proved to be a competent VPN provider for gaming. Each of my matches went about smoothly, without any hitches. In fact, it was like I wasn’t using a service at all.

You need a VPN that’s versatile enough to run on all your devices. Otherwise, there will be an avenue wherein troublemakers shall get to compromise you.

Fortunately, the developers of IPVanish and VyprVPN are aware of this. They’ve made their VPNs compatible with as many operating systems and gadgets as possible. Below is a comparative table showing the platforms that each VPN works on:

IPVanish has apps for Chromebook OS as well as Linux, whereas VyprVPN does not. For that reason, it’s the winner in this category of our VyprVPN vs IPVanish match.

Few VPN providers are like IPVanish, which allows for unlimited simultaneous connections with one subscription. The service offers incredible value since it can keep lots of people safe. It’s great for anyone who wants more for less.

In comparison, VyprVPN lets you connect a max of 5 devices simultaneously. In the VPN industry, this amount is relatively average. Needless to say, it still makes the service fall short of its competitor.

Despite being founded a long time ago, IPVanish only has 1400+ servers. With that said, its network is still roughly double the size of VyprVPN’s, which operates 700+servers around the globe.

Leaping over China’s Great Firewall isn’t easy. Even the best VPN services have a hard time doing so with success and consistency.

Fortunately, you can rely on VyprVPN to provide you with access to the global internet in China. Countless reports have stated that it does not struggle with getting the job done. Sadly, the same can’t be said for IPVanish. The service doesn’t work in China, even for a moment.

The applications of IPVanish aren’t suited for everyone. Each one has a complex interface that’s difficult to navigate. Additionally, all of them have complicated home screens, which bombard you with unnecessary info. Lastly, they’re not aesthetically pleasing.

VyprVPN’s apps are very user-friendly and easy to master. In fact, they’re perfect for people who aren’t tech-savvy or first-time VPN users. Upon opening them, you’ll be greeted with a home screen wherein everything important can be accessed.

The winner for this category is VyprVPN. How come? Because its native apps are easier to use, lighter on memory, and have better interfaces. It’s guaranteed that you won’t be disappointed with them. And yes, that’s regardless of the platform you’re using.

IPVanish has a “scramble” feature that’s basically its proprietary version of VPN obfuscation. It lets you modify the OpenVPN protocol to enhance security.

Meanwhile, VyprVPN boasts two exclusive features. The first is called VyprVPN Cloud. You can employ it to add a degree of safety accessing cloud storage services. However, it only functions alongside VirtualBox, Amazon Web Services, and DigitalOcean.

VyprVPN’s second unique feature is VyprVPN DNS. By using it, you’ll get to add another layer of protection from DNS leaks.

Because it has more offerings, the victor of this round of our IPVanish vs VyprVPN match is again VyprVPN.

To better understand what each service offers in regards to customer support, please see the table below:

As you can see, IPVanish offers phone support while VyprVPN doesn’t. Moreover, it has faster response times. That means you’ll immediately get a solution to any problems you might encounter with the service.

VyprVPN and IPVanish are both priced very competitively. Each is suitable for individuals who don’t have a lot of cash to spend. Check out the table below to know their different plans and how much they cost:

The prices of VyprVPN are clearly more affordable. On top of that, it also has a longer money-back guarantee period. As such, it’s the winner of this final round of our IPVanish vs VyprVPN match.

Is VyprVPN better than IPVanish?

Yes. VyprVPN is the clear winner of our comparison between the two. Why? Because it works in China and has better security, speed capabilities, applications, and prices.

While its network is smaller, I’m sure it will only grow in time. After all, the service is still new and has a lot of room for growth.