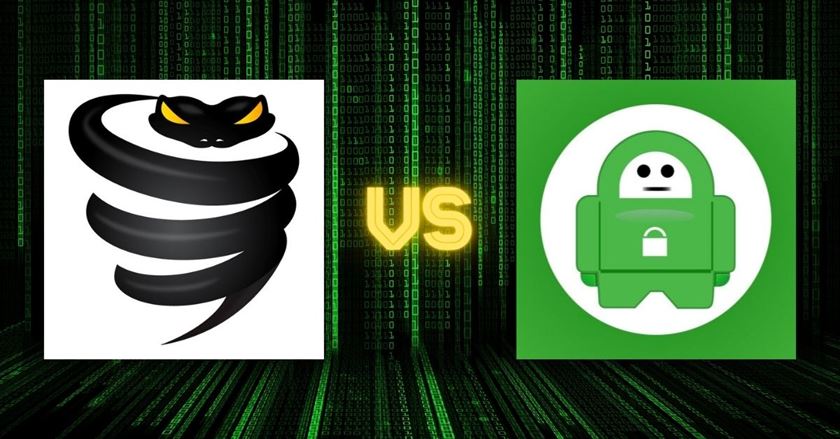 Private Internet Access (PIA) is among the world’s most famous VPN services. It’s often pitted against VyprVPN, which is a rising star in the industry.

Experts almost unanimously agree that the latter is better in almost every regard.

Below is a comparative table showing all the specifications of each VPN:

The two services have many things in common. At the same time, lots of stuff differentiate them from one another.

VyprVPN’s headquarters is in Switzerland while Private Internet Access is in the US. Only the former service isn’t governed by the Five Eyes Alliance.

The latter needs to follow restrictive copyright and privacy laws that leave it handicapped. If anything, this puts it at a great disadvantage versus its competitor.

Like all popular VPN clients, Private Internet Access and VyprVPN adhere to robust encryption standards. Both make use of AES 256-bit encryption as well as SHA-256 hash authentication.

The handshake that VyprVPN employs hasn’t been disclosed. Meanwhile, it’s known that PIA utilizes RSA-4096, which is standard in the industry.

Both services support OpenVPN (UDP & TCP), IPSec (IKEv2 LT2P), and WireGuard. What sets them apart is that VyprVPN also lets subscribers use PPTP. In addition, it has its own proprietary protocol that’s based on OpenVPN called Chameleon.

Private Internet Access and VyprVPN proudly say they provide 100% protection against leaks. To determine if this is true, I ran some tests using IPLeak.net. Before we take a look at the results, here’s how things fared without me using any VPN:

Next, this is how Private Internet Access and its server in Singapore did:

Last of all, here’s the results after I moved to VyprVPN’s server in the same location:

Fortunately, neither VPN disappointed me. Both were able to keep me anonymous without any hiccups. Therefore, they’ve proven their trustworthiness. When using both, I can rest assured that troublemakers won’t be able to find out my location.

Sad to say, none of the two have transitioned to a RAM-based network. Hence, the only thing stopping each from disclosing your private information are their no-logging policies.

A good thing is that both services haven’t been recorded to ever give up data to the authorities.

Between the two, I’d have to say that VyprVPN has better security. That’s because it supports more protocols and is based in Switzerland. In the country, it remains free to operate without interference from the government. Thus, it's the winner of this VyprVPN vs Private Internet Access round.

Private Internet Access isn’t known for being speedy. In comparison, VyprVPN has a reputation for being one of the fastest services on the market. Some have even gone as far as to compare it with NordVPN and ExpressVPN, which are the most renowned clients in the industry.

I had to know which service has better speed capabilities so I tested each one out. Here’s a screenshot of my base connection for reference:

Now, this is how PIA’s Singapore server changed it:

It was surprising to see the two perform quite similarly. Still, VyprVPN did slightly better than its competitor. As a result, it’s the winner of this category.

VyprVPN doesn’t have a fully enabled P2P network while PIA does. To compensate for this, it detects torrenting activity then automatically connects you to the right  server. From a convenience standpoint, this is great for all users.

I had to know if Private Internet Access and VyprVPN could protect me whenever I partake in a torrenting session. Due to that, I conducted tests using IPLeak.net once more. Here are my results without any VPN being employed:

And here’s how PIA’s and its Singapore server did:

Finally, here’s how VyprVPN and its corresponding server did:

To my surprise, VyprVPN didn’t pass my test. My IP address was detected while I was torrenting with it. Because of that, the winner of this PIA vs VyprVPN round is Private Internet Access by default.

Many people have complained about PIA’s subpar streaming capabilities. It only unlocks a couple of libraries on Netflix. Furthermore, it’s not capable of bypassing the blocks of other platforms such as Hulu, BBC iPlayer, and Amazon Prime.

On the other side of the spectrum is VyprVPN. Reports have universally stated that it can work around the geoblocks of Netflix, Hulu, Amazon Prime, BBC iPlayer, and other streaming websites without any hiccups.

Netflix is without doubt the most popular streaming platform. For that reason, I had to know if each VPN could function alongside it. The first service I tried was Private Internet Access. My title of choice was Spotlight. Here’s the result:

Here’s how VyprVPN’s server in New York did when I tried to watch the same movie:

As you can see, both VPNs were able to stream the title. Be that as it may, the winner for this category is VyprVPN. How come? Because it can unlock more services and it’s less prone to giving you problems with quality and buffering since it’s faster.

I’m a competitive Call of Duty Mobile player who must have a VPN that could safeguard me whenever I partake in a gaming session. To see if either could meet my needs, I played a few matches while connected to each one.

My experience with Private Internet Access was decent. While there were several instances of lagging and drops in frames, I was able to finish my matches without hiccups. Also, it only took a couple of seconds to get into the game.

VyprVPN’s performance was stellar. Not once did the service give me problems with frame drops or lagging. Thus, I have no choice to declare it as the winner of this category.

Private Internet Access and VyprVPN’s creators have made both compatible with lots of platforms. For a better understanding of the matter, please refer to the table below:

The lack of a Linux app and browser extensions make VyprVPN shorthanded. It drastically falls short versus Private Internet Access, which functions on all mainstream platforms with the exception of Chromebook OS.

VyprVPN allows for a maximum of 5 simultaneous device connections. Meanwhile, PIA gives you the chance to up to 10 devices using one account. Hence, it’s the clear winner in this round of our match between the two VPNs.

Because it’s quite new, VyprVPN doesn’t have a large network. It operates a mere 700+ servers across the globe. As such, it fails to offer much in regards to connectivity. Furthermore, it’s not that good with maintaining user anonymity on paper.

China’s draconian internet censorship measures are a huge obstacle for any VPN. Luckily, the majority of users have reported that it makes short work of the Great Firewall.

You can’t say the same for Private Internet Access. Expert reports and posts on Reddit all say that it’s not the best service to have in China. While it can sometimes leap across the country’s censorship measures, it cannot do the job consistently.

Private Internet Access and VyprVPN’s native apps are remarkably similar. They all take on a minimalistic approach to things. When using them, you shall discover that their interfaces are extremely easy to get around. On top of that, they’re also highly configurable.

Upon opening PIA’s app for Windows 10, you’ll instantly notice the quick connect button. Under that is a tab where servers can be selected. To toggle the settings menu, simply click on the dot icon found on the upper right corner.

VyprVPN’s corresponding app has a lighter theme. On its home scream, everything you need is on display. And yes, this includes the settings menu. Thanks to that, using it is elementary and can be done by just about anyone.

Since the apps of VyprVPN are simpler to utilize and more aesthetically pleasing, the service is the winner of this category.

Unfortunately, you won’t be getting an extensive set of features upon buying a Private Internet Access subscription. The only thing the service has is PIA MACE, which is the service’s own proprietary ad and malware blocker.

In comparison, VyprVPN has two additional features that you can take advantage of. The first one is VyprVPN Cloud. It’s a cloud storage solution for people that utilize VirtualBox, Amazon Web Services, and DigitalOcean. Second is VyprVPN DNS. With it, you can further protect yourself from DNS leaks.

Since it has more one-off features, the winner of this category is VyprVPN.

Look at the table below to see what each VPN offers when it comes to customer service:

Private Internet Access and VyprVPN offer the same things when it comes to customer support. That said, what sets them apart is their average response time.

After contacting PIA, you can expect a reply within just 45 minutes. Meanwhile, it takes 4 hours for a representative of VyprVPN to get back to you.

To get a full grasp of how each VPN prices themselves, look at the table:

Private Internet Access is way cheaper than its competitor. For just $39.96, you’ll be able to get a 1-year subscription. In the VPN industry, this is awesome as few services can compare. As such, it's the winner in this VyprVPN vs PIA round.

Yes. VyprVPN is an awesome VPN that’s almost superior in every way to PIA. With it, you will be getting better security, faster connection speeds, superior unblocking capabilities, simpler apps, and connectivity in China.

With all that said, Private Internet Access is still a wonderful VPN. It’s perfect for those who want to get a great VPN at a decent price.